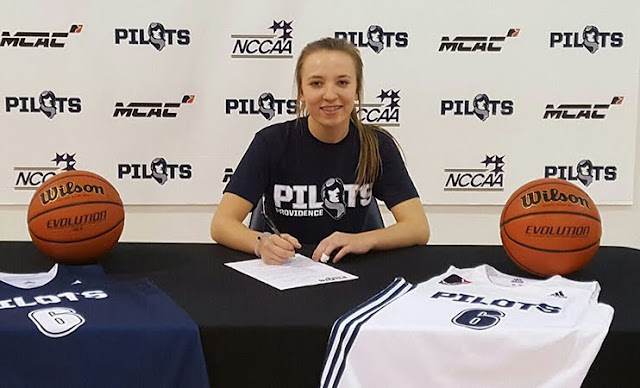 Katelin Thiessen knew Providence was a good fit the first time she visited the Otterburne campus.

“I fell in love with Providence, with the atmosphere, the people, the location—everything,” she said after signing her letter of intent.

Thiessen, a 5’7” guard from South Junction, will join the Pilots for the 2017-2018 season, and head coach Joel Coursey is already looking forward to her arrival.

“There was no doubt that Katelin was a talented player,” he said. “But after meeting with her I knew she was a good fit for our program and our school.”

In her Grade 11 year Thiessen averaged 15 points, five assists and five steals per game and was named Varsity Provincial MVP. The award followed a similarly impressive campaign in which she claimed Junior Varsity MVP honours, and the season before that she won the Zone 13 League MVP award.

Additionally, in each of the past two years she helped the Ross L. Gray Raiders to the A-level Provincial championship.

“Katelin has a strong court sense and understanding of the game which has already translated into success at the provincial level,” remarked Coursey. “She is a high-level competitor and I am excited for the opportunity to work with her next season.”