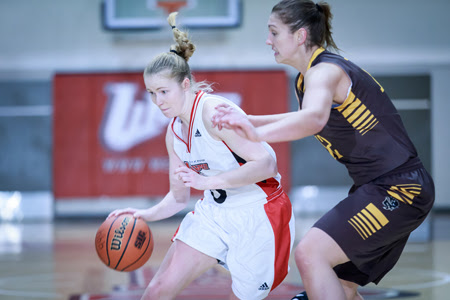 The University of Winnipeg Wesmen have announced that Women’s Basketball player Lena Wenke has been selected to the German U20 National Women’s Basketball team. The team will participate in the U20 Women’s European Championships taking place from July 7-18 in Matosinhos, Portugal.

“I am very proud to be able to represent my country. It is my third time playing at the European Championships and it has always been an honour. We have a great team and everybody is ready to go and compete. I am very excited and am really looking forward to the next two weeks”, said Wenke.

Wenke was impressive last year in her first season as a member of the Wesmen Women’s Basketball program. The 5’10” guard from Gottingen, Germany was a starter in all 20 regular season games averaging 10.1 points per game and was second on the team with 24 three-pointers. Wenke’s impressive season led to her being recognized as the Radisson Hotel Female Rookie of the Year.

“We are very proud that Lena made the Germany U20 National Team. Lena is an extremely dedicated and hardworking athlete and she deserves this selection. Lena had a great rookie season with us and I know this National team experience will only build her confidence and motivate her to help our team moving into this coming season”, said Tanya McKay, University of Winnipeg Wesmen Women’s Basketball head coach.

For all the up to date news and scores from the European Championships log onto http://www.fiba.com/europe/u20women/2016/