Canadian National Men's Team One Win Away From Rio 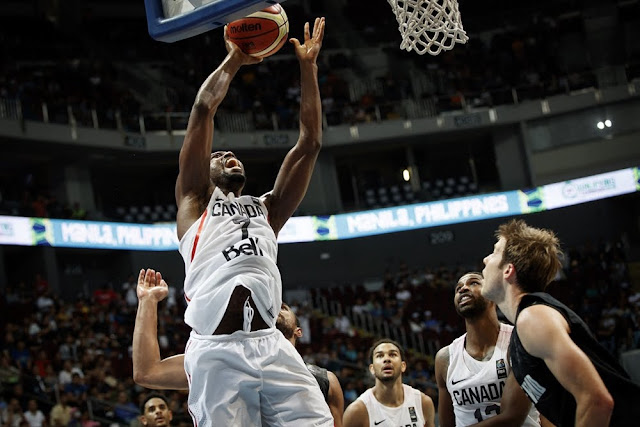 (MANILA, PHILIPPINES)– Team Canada secured a spot in the finals at the 2016 FIBA Olympics Qualifying Tournament, winning against New Zealand, 78-72. They are now one win away from joining the Canadian Women's team in Rio.


"I told them to breathe just to relax, we got caught up a little bit and they hit a three which hurts us. At the end of the game our execution, spreading the floor and being able to use our athleticism was our strength". SMNT head coach Jay Triano.

Melvin Ejim was the star in the win, scoring 13 points with seven rebounds, a monster block against Webster and scored two and-one's in the fourth quarter to help secure Canada's win. Joseph hit 23 points using his quickness to be an unstoppable force when attacking the basket. Tristian Thompson was FIBA's player of the game; he scored 13 points, grabbed 10 rebounds and was +20 in efficiency.

The two teams got out to a competitive start but Canada's momentum on offensive was strong while New Zealand struggled to find their rhythm. Canada shot 70% from from the 2-point range and was shooting 60% from the 3-point line. After 10 minutes of play, New Zealand pulled together to led 23-25.

The second quarter the two squads were evenly matched, both chipping away to try and take the lead. Canada went on a 16-3 run to put the Men's National Team up 39-25. New Zealand clawed back and tied the game 42-42 at the half.

Joseph had ten points and four rebounds during an evenly matched third quarter. As both teams battled for ten minutes, Canada was able to take back he lead 58-54.

The fourth quarter was very exciting as both teams showed a tremendous amount of effort and heart. Canada clinched the win 78-72.

"Coach Jay put a team together to win, I'm glad I was able to join and be a part of this, we have one more game. We broke this tournament down into four quarters it's the fourth quarter we have to be prepared we're ready, we came this far and we put our self in a position to win." Tristian Thompson.

The Men's National Team will compete in the Finals Sunday July 10th at 9:00, where Team Canada will compete to qualify for the Olympic Games. Opponent for the semi-final game is to be determined, follow @CanBBall for updates.