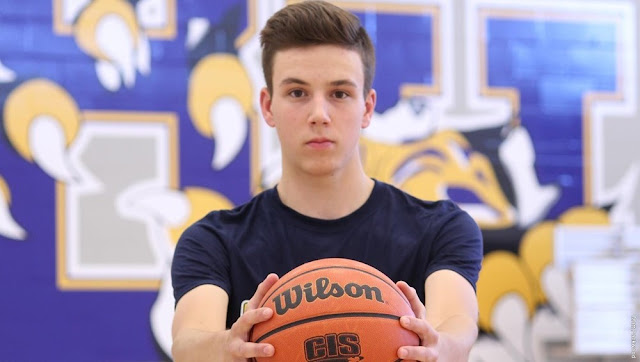 Riley Schaus' rise in basketball has been rapid, and that upward trend is set to continue as the Brandon product has signed a letter of intent to join the Brandon University Bobcats men's basketball team.

Having only played hoops for a handful of years, the soon-to-be graduate of Brandon's Crocus Plains High School never expected to play Canadian Interuniversity Sport (CIS) basketball right out of high school, but is certainly thrilled for the opportunity to play for his hometown team.

"I thought I would have to play college before making the jump to the CIS level for a couple years," says Schaus. "Having my friends and close family members able to watch me play at home will be really fun."

Schaus has multiple connections to the Bobcats, as his Triple Threat club basketball team was coached by former Bobcat and Canada West all-star Adam Hartman. His varsity Plainsmen team at Crocus this past season was coached by former Bobcats assistant coach Jeremy Wielenga.  That varsity team won the Brandon city championship this past season, a fitting end to his high school basketball career.

He had been in talks with multiple different college programs, but when his hometown Bobcats asked him to join the team, it was a no-doubter.

"It means a lot. I've always watched them and always been curious to see how they've done and I just think it's a great opportunity for me to join the team this fall," says Schaus.

It was Schaus' determination that made coach Cheung take notice, and offer a red-shirt spot to the 6-foot-1 guard.

"Riley is an exceptional shooter, and in my opinion was the best player in the city this year," says Cheung. "He led his team to a city championship, and will look to continue his development here at BU.  He has only been playing since grade 10, but his hard work and commitment have got him to the level he is at now. As he gets stronger and adjusts to the faster-paced game in the CIS, I believe he will continue to develop."

On top of being one of Brandon's best on the hardwood, he's also highly skilled on the links as well. An avid golfer, Schaus was a member of the Crocus Plains golf team that won provincials in his grade 11 year. Schaus is also a regular participant in the Tamarack Golf Tournament.

Schaus is registered in Brandon University's Bachelor of Business Administration program and will begin working towards a degree this fall.