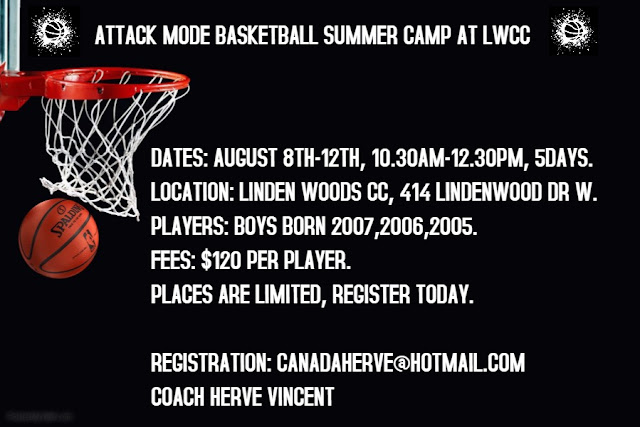 UPDATE:  3 SPOTS LEFT - LAST CHANCE TO REGISTER: The Next Attack Mode Basketball camp will be offered in August 2016 for boys born in 2007, 2006 and 2005 at Lindenwoods Community Centre in Winnipeg. The camp offers quality training and fundamental teaching to the basketball players who want to learn and improve with the help of experienced coaching staff.

Vincent was born and raised in France, where his dedication to the game began in 1988 as a 10 year old beginner. He has been involved in coaching since 1997, initially as a volunteer until he became a certified coach in 2005. By this time he earned his degrees in sociology, education and sports training.

He has coached and trained players at all levels, from youth to adult, males and females, at both the city and national level for 18 years. He has experience in promoting basketball via presentations in schools, community centers, university, tournaments and skill camps. From 2006 to 2009, Vincent worked as a technical supervisor for the youth basketball development program in the SPO Rouen professional club, where he developed and implemented specific youth skills programs. He also developed the grassroots program "school of basketball" multiplying the number of players by 3 times in 3 years with the club. He was nominated head coach for 12U Boys selection at the provincial level in 2008 and 2009 in Normandy, France.