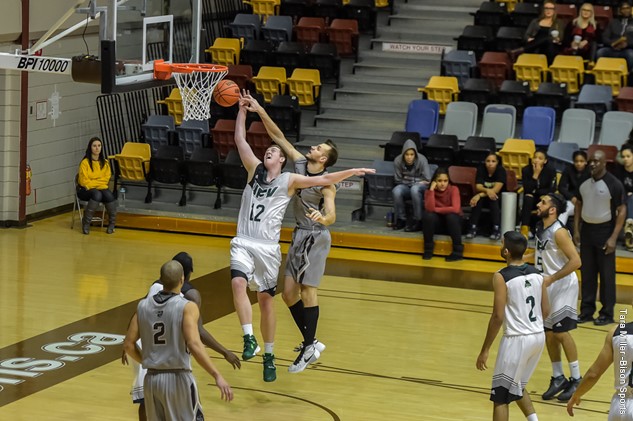 Manitoba finished third in Pioneer Division while Calgary was first in the Pioneer Division; the two teams split the season series and a Manitoba win against Calgary earns a berth into the 2016 CIS championship

The Bisons will play the Dinos (regular season: 17-3; playoffs: 2-0) in the semifinal game on Friday, March 11 at 9 p.m. CT in Calgary. The playoff game can be seen live on the canadawest.tv website. A Manitoba win against Calgary earns a berth into the 2016 CIS championship.

If Manitoba loses against Calgary, the Bisons might have a second chance for a CIS berth if UBC wins the other semifinal contest. There are two Canada West berths plus the host UBC gaining entry into the 2016 CIS men’s basketball championship.

The Bisons are on a roll as they have not lost in nine consecutive games (seven in regular season and two in playoffs) and were last defeated at Lethbridge on Jan. 22/16.

Manitoba is seeking to play in a CIS men’s basketball championship for the first time since 1985.


Omoerah, 24, played in his third season with the Bisons and had an outstanding season in Canada West as he was selected 2015-16 Canada West Second Team All-Star. Omoerah’s season is all the more remarkable as he returned to Manitoba after a three-year absence and last played at the U of Manitoba campus in the 2011-12 season. The Winnipeg native was one of many factors in the Bisons finishing with a 15-5 conference regular season record and hosting conference playoffs for the first time since the 2003-04 season. He almost finished the season averaging a double-double with 13.2 points per game (32nd in the Canada West) and 9.8 rebounds (fourth in conference) while starting and playing in all 20 conference regular season games.

The 6’5”, 205 lbs. guard/forward showed his versatility as he also added 3.8 assists per game, good for a tie for fourth in Canada West and 2.1 steals per game, tied for fifth in the conference. In addition, Omoerah was fourth in conference minutes played per game at 34.1, was 18th in field goal shooting percentage at 49.1% plus his offensive rebounds per game at 2.4 was tied for seventh in Canada West while defensive rebounds per game total of 7.4 was first in the conference.