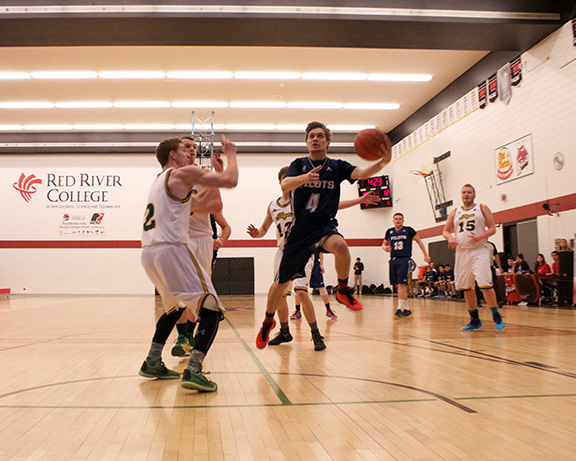 The results between the women’s and men’s divisions after day one of the MCAC Basketball Final Fours Championships were considerably different.
While the women's side saw fairly wide margins and no upsets, both men's semi-final games were tight and in both, the lower seed won.Women's

The Pilots were competitive in this game, down by only 1 at the end of the 3rd quarter. Despite some serious size disadvantages, they out-hustled Red River enough to stick around until 3rd year Isabella Selk went down for the pilots with a devastating ankle injury. Selk had been having a whale of a game, leading her team with 10 points to go along with 8 rebounds in 24:43 minutes played. The Rebels, who have a number of great ball handlers and scorers, picked up and outscored PUC 20-8 in the fourth quarter for a 58-45 win. Raven Boulanger scored a whopping 26 points, 5 rebounds and two steals for the Wesmen while 2016 MCAC MVP Amber Harms posted 8 points, 14 rebounds and 4 steals for the Pilots. Boulanger was named Player of the Game along with PUC's Courtney Engel.

#1 Canadian Mennonite University defeats #4 University of Winnipeg College 67-22The Blazers came out hot and the Wesmen did not, CMU going on a 14-0 run to start and end the first quarter. As it’s been for much of their season, CMU simply didn’t face a great deal of competition in this game. They got to spread their minutes out, where every player saw at least 12 minutes of court time. Ashtyn Hodges scored 18 points, 4 rebounds, 2 assists and 4 steals to lead the Blazers while Kristin Manibo’s 6 points led all Wesmen.

#4 Red River College defeats #1 University of Winnipeg College 65-61
After beginning the season with 16 players on their roster, the Rebels were reduced to just 11 after ineligibilities and injuries plagued their team. But in January they returned Gliff Macalua, Taylor Brown and Ivan Griffiths who all had a huge part in today’s game, something coach Scott Kirkpatrick says solidified the team’s leadership.“Those three are all leaders, and they lead in different ways…but we lost all three of them to injury over the past six weeks. So we’ve had a real tough time being one unit and getting healthy, and this is the healthiest our team has been all year”.Healthy to the tune of 17 points from Macalua and 13 from Brown, while Griffiths added 3 steals 2 assists and 3 rebounds. The Wesmen featured their usual cast of talent but it was far and away Chris Demauleon-Bartolay who was touching the ball the most. He led with 13 points but it was via a less than desirable 4-for-13 field goal percentage, and UW trailed by 12 too late to come back from.Regarding tomorrow’s opponent in the final which had not yet been decided, coach Kirkpatrick acknowledged both teams as being worthy finalists.“It will be a great team tomorrow, I think it’s going to be an exciting final”.

“We don’t have a preference, we want whoever’s there. We want to play the best team”. Bartolay and Macalua were both named Players of the Game.

Canadian Mennonite University defeats Providence University College 67-66Pretty fitting that CMU’s Jon Hayter played 18:15 minutes in the first half and PUC’s Richard Rogers played 18:09 because Rogers got the task of guarding Hayter a great deal and he did an exceptional job holding the guard to 8 points in the first. The two teams headed into the break with PUC leading 33-32 after Cash Blanca left his mark on the first half, hitting a couple huge 3 pointers to give PUC just a 1 point lead.The second half was the most thrilling basketball the MCAC saw today and this season, with a back-and-forth pace that only began to slow because of fatigue. Both teams went to their benches a great deal but the final moments belonged to the players who got them there. With 2 seconds left and CMU’s Andrew Davison at the free throw line, Davison missed the first and attempted to intentionally miss his second but missed the rim giving PUC a timeout, the ball advanced to the front court, and a timeout to draw something up. In the final 2 seconds. Blanca, who finished with a game-high 23 points, got the nod but he was unable to get a decent shot over top of his defender and the Blazers won a nail biter, 67-66. Cash Blanca and Jon Hayter were named Players of the Game.
Red River College will defend its title against Canadian Mennonite University in both the Men's and Women's divisions of the MCAC 2016 Basketball Championships tomorrow, beginning at 1:00 pm and 3:00 pm, respectively.