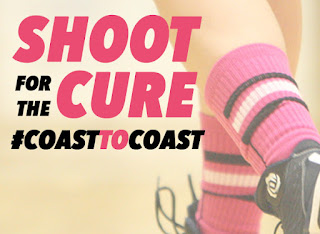 The Shoot for the Cure campaign has proven an overwhelming success since it was launched in the fall of 2007 with over $886,000 in donations. This season, for the fifth year in a row, all 47 CIS women's basketball schools are set to participate in the program.

At the 2015 CIS championship in Quebec City last March, the WBCA presented a cheque for $102,312.05 to the Canadian Breast Cancer Foundation. An additional $23,049.71 was amassed by universities that elected to donate their fundraised money to local or provincial organizations, bringing the overall Shoot for the Cure total for the 2014-15 season to $125,361.76.

This year's edition of Shoot for the Cure could prove the most special to date, thanks to the fast approaching $1,000,000 benchmark and the launch of a new coast-to-coast project, the Pink Ball Journey.

"This is a very special year," said Jeff Speedy, Shoot for the Cure project manager, WBCA president and head coach at the University of New Brunswick. "We should easily pass the $1,000,000 mark for total money raised since the inception of this event nine years ago. In addition, we are launching the journey of a pink basketball from the University of Victoria to Memorial University of Newfoundland. This journey starts at UVic on Saturday, will hit every CIS women's basketball campus during the season, and will conclude with Memorial passing the ball off to UNB at the national championship in March."

Over the course of its cross-country journey, the pink Wilson basketball will be signed by every CIS head coach.

"The journey symbolizes the struggle people are going through to fight this deadly disease and how we are all in this fight to cure cancer together," Speedy said. "There will be some great photo ops with the ball every step of the way and everyone can follow the journey on Twitter, as we will be using the hashtags #CoastToCoast and #ShootForTheCure all season long."

Once again this year, CIS schools will raise money through regular season games, tournaments and other special events. The first Shoot for the Cure games of 2015-16 are scheduled for Oct. 8 as part of the University of Calgary's women and men's Calgary Cup tournaments.

The 2016 CIS championship is set for March 17 to 20 at the University of New Brunswick in Fredericton.

The fundraising initiative was the brainchild of Rod Gilpin, the long-time bench boss of Bishop's women's program now in his eighth season as head coach of the Gaiters' men.