TORONTO, ON (January 26, 2016) - The preliminary rounds are set for the three 2016 FIBA Olympic Qualifying Tournaments (OQT), taking place in Belgrade, Serbia; Manila, Philippines; and Turin, Italy from July 4 to 10, 2016. The three six-team tournaments will be held over 8-days with the champion from each location qualifying for Rio.

“We’re looking forward to Manila. It didn’t matter where or who we ended up against, the goal is to qualify,” said Jay Triano, head coach, men’s national team. “This tournament will give us another opportunity to show what we’re capable of and provide meaningful international experience for our team.”

The official draw ceremony took place today in Switzerland, with FIBA officials onsite to make the selections. In Manila, Canada will play in Group A against 31st-ranked, Senegal and 8th-ranked Turkey. The Philippines, France and New Zealand will play in Group B.

“Inexperience was a huge factor in last summer’s results. It was heartbreaking, but it allowed us to grow as a team,” said Steve Nash, general manager, men’s national team. “The players, coaches and staff all have another year under our belts and know we have a lot yet to accomplish.”

Canada placed third in the 2015 FIBA Americas Championship, missing direct qualification to Rio, but making them eligible for the 2016 OQT.

“We didn’t get the job done last summer,” said Cory Joseph of the Toronto Raptors and 2015 Team Canada captain. “We’ve got work to do, this will be a tough tournament with a lot on the line, but we want to represent the red and white in Rio this summer.”

Team Canada will gather in June for training before heading overseas for pre-tournament exhibition games. 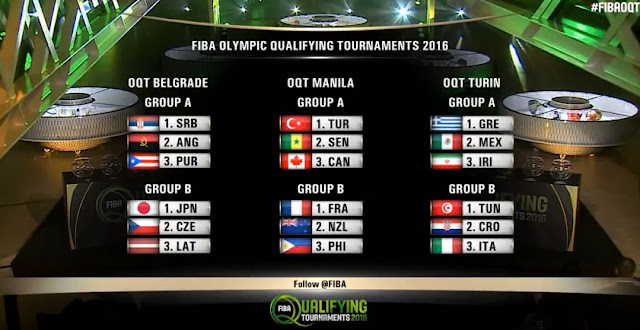