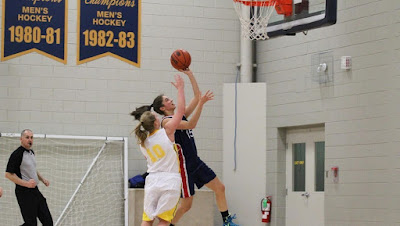 The Bobcats women's basketball program has announced the addition of the programs first recruit for next year.

Adrianna Proulx of Thompson has signed an official CIS letter of intent, committing to the Bobcats for the 2016-17 season. Proulx is entering her senior season with Thompson's R.D. Parker Collegiate, and has impressed in her young career thus far.


The 5-foot-10 wing has shown flashes of brilliance on the hardwood, both on her high school team and as a member of the Manitoba provincial team program.

Proulx's first goal was to play CIS basketball, and now that she's committed she's shifted focus to her second goal of following in the footsteps of her current coach and Phys-Ed teacher, former Bobcat Sara Gillis (nee Conlin).

"I'm very excited to become a Bobcat and look forward to being a part of the team next season," said Proulx. "I was impressed with BU coach Novell Thomas' plans and positive outlook for the future of the Bobcats. It is one of the reasons why I decided to commit to BU. I like what he is doing with the program and I feel like BU is the right fit for me."

Proulx's playing resume is impressive. She was ranked #7 in the Winnipeg Free Press top 10 of Manitoba players after leading R.D. Parker to the school's first AAA Provincial Championship last season, being named tournament MVP for her efforts. She was also named MVP of numerous invitational tournaments, a two-time MHSAA Athlete of the Week, and her school's senior athlete of the year.

She was also a member of the Manitoba 17U team that captured a gold medal at the 2014 national championships.

Her list of accomplishments is lengthy for such a young player, but coach Thomas feels the accolades are well deserved.

"We are really excited to have Adrianna join the program," said Thomas. "Her athleticism, length and desire to excel, are her greatest assets. She's won at all levels and has an understanding of what it takes to succeed. I'm looking forward to working with Adrianna next season."

Proulx plans to study in BU's Department of Physical Education Studies starting in September of 2016.