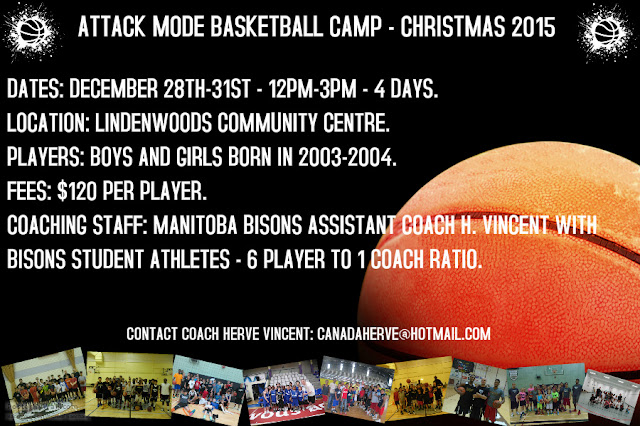 CAMP FULL:  Details on the next Attack Mode Basketball camp will be offered during Christmas holidays. The camp will run December 28-31 from 12-3 pm each day at Lindenwoods Community Centre for boys and girls born in 2003 and 2004.  Cost to attend is $120 a player.  The camp offers quality training and fundamental teaching to basketball players who want to learn and improve with the help of experienced coaching staff.

Please note there will be a 20 spots maximum at this camp.

Vincent was born and raised in France, where his dedication to the game began in 1988 as a 10 year old beginner. He has been involved in coaching since 1997, initially as a volunteer until he became a certified coach in 2005. By this time he earned his degrees in sociology, education and sports training.  He has coached and trained players at all levels, from youth to adult, males and females, at both the city and national level for 18 years. He has experience in promoting basketball via presentations in schools, community centers, university, tournaments and skill camps. From 2006 to 2009, Vincent worked as a technical supervisor for the youth basketball development program in the SPO Rouen professional club, where he developed and implemented specific youth skills programs. He also developed the grassroots program "school of basketball" multiplying the number of players by 3 times in 3 years with the club. He was nominated head coach for 12U Boys selection at the provincial level in 2008 and 2009 in Normandy, France.

Winnipeg native Xavier Smith graduated in 2013 from the University of Manitoba. The former Sisler High school student and Bison team captain brings his CIS experience and leadership as a mentor and coach. Smith played for Lakeland College and Brandon University before heading back home to play for the Bisons’. In 2012 he became the coordinator of the SWISH program that offers free drop in Basketball programs to inner city kids in Winnipeg. A student of the game, Xavier’s development derives from hard work and mental toughness. Head coach Vincent says “Xavier is the definition of hard work, the perfect teammate who also knows how to lead and motivate young people in the community.”

Yigit aka “Yogi” was born and raised in Istanbul, Turkey and was recruited by the Manitoba Bisons in 2011. He started playing basketball with the successful Euroleague Club Anadolu Efes's  U10 team. He won the National High school Championship title and played in the ISF World High School Championship with Yildizlar Private High school. The skilled 6foot6 all-around Turkish import continued his academic and athletic journey in Canada with the Manitoba Bisons Basketball program between 2011 and 2014. As assistant coach for the Junior Bison program during this period, he quickly became one of the students’ favorite bison players.