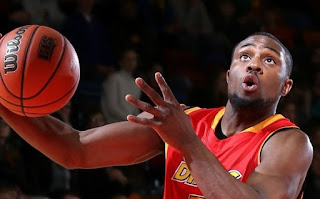 Slan Sports Management has announced that Jarred Ogungbemi-Jackson of Winnipeg has signed his first professional contract with Galitos Tley in the Liga Portuguesa de Basquetebol (LPB) in Portugal.


A 5’10’’ point guard, Ogungbemi-Jackson graduated from the University of Calgary this spring. In his final season, he led the Dinos in scoring (19.3 PPG), rebounding (7.3 RPG), assists (5.2 APG) and steals (1.4 SPG). He finished the year ranked 12th in Canadian Interuniversity Sport (CIS) in scoring and 6th in assists. Ogungbemi-Jackson was also selected to the CIS All-Canadian Second Team and the All-Canada West Universities Athletic Association (CanWest) First Team. 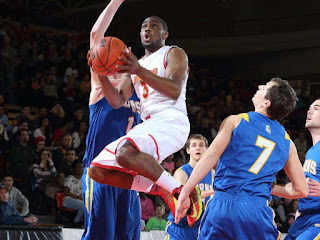 Born in Winnipeg, Manitoba, Ogungbemi-Jackson graduated high school from Garden City Collegiate, where he averaged 28.0 points, 10.0 assists, 8.0 rebounds and 5.0 steals per game in his senior year. In his final two seasons there, he was named Most Outstanding High School Player in Manitoba as he led his team to back-to-back provincial titles, and was named MVP of the 2009 Manitoba Championship Game after scoring 34 points in a 107-75 win.

Ogungbemi-Jackson was an impact player right away at Calgary, averaging 10.3 points, 3.4 rebounds, and 3.3 assists in his rookie campaign while helping the Dinos all the way to the CIS Semi Finals. Then, in his second full season in 2011-2012, he took his game to a new level, averaging 18.0 points, 6.7 rebounds, 3.4 assists, and 2.4 steals per game. In his third and fourth years, he cracked the 20-point barrier, ranking 7th in the country at 20.7 points per game in 2012-2013 and 5th at 20.6 points per game in 2013-2014. He finished his career with two All-CanWest 1st Team selections and one All-CanWest 2nd Team selection, to go along with his 2015 All-CIS 2nd Team award. Ogungbemi-Jackson leaves the University of Calgary as the program’s all-time leader with 217 career steals, and their 3rd all-time leading scorer with 1,799 career points.

Ogungbemi-Jackson also has experience on the international stage, as he attended the 2009 selection camp for Canada’s Junior National Team, and recently represented Canada at the 2015 FISU Summer Universiade in Gwangju, South Korea.

“I want to thank the Galitos organization for believing in my abilities and giving me the opportunity to start my professional basketball career,” said Ogungbemi-Jackson. “Becoming a pro has been a goal of mine since I was a teen and I am very excited to start my journey in Portugal with the club. I plan to bring a relentless work ethic and ultra competitive edge to the team.”

Galitos Tley finished the 2014-2015 season in 10th place in the LPB standings with a 6-16 record. They see Ogungbemi-Jackson as a key piece to help them crack the playoffs in 2016.

“I am really happy that we signed Jarred,” said Andre Martin, Galitos Tley Head Coach. “We truly believe that along with his passion for the game, he has the talent and capacity to help the team win.”

For more information and individual box scores for Jarred throughout the season, visit: http://slansportsmanagement.com/jarred-ogungbemi-jackson.