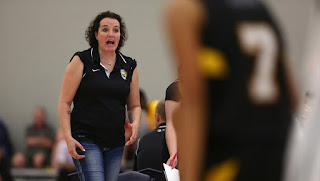 Tracy Johnson (nee MacLeod) inspired a lot of people as a player with the Brandon University Bobcats women's basketball team in the 1990s and now she's inspiring a new generation.

Johnson suffered one of the most horrific injuries in BU history when she broke the tibia and fibula in her right leg during a game in 1992. The leg eventually had to be amputated, but it didn't stop her from playing. Three months after the amputation, Johnson rejoined the Bobcats to become the first ever player with a prosthetic in Canadian Interuniversity Sport.

The Bobcats, CIS and other universities have named awards after her.

Now 42, a mother of four and living in Warman, Sask., Johnson is teaching both her kids and others the game she loves. She will coach a high school boys' basketball team next season and currently is the bench boss of Saskatchewan's

"I love this so much, it's not even funny," said Johnson, who is a substitute teacher and was in Brandon on Saturday for the Prairie Challenge, a series of exhibition games between Saskatchewan and Manitoba's provincial teams. "I spend my life in the gym and with my kids and other kids. I just look forward to this.

Although Johnson has an incredible story about overcoming tremendous odds to pursue her passion, it's not a story she tells all that often.