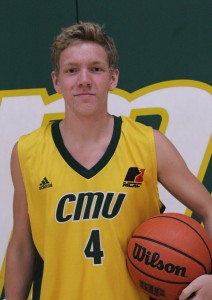 The CMU Men's Basketball Team is happy to announce the commitment of Ross L. Gray's dynamic guard Josh Hebel-Allard for the 2015-16 season. Hebel-Allard led his Raiders to a record of 26-1 in his grade 12 season en route to the 2015 MHSAA 'A' Boys Provincial Championships last March.

The 5'10 point guard has factored in the major success of the Ross L. Gray boys program since 2011. Hebel-Allard has been selected for the varsity boys roster since entering Grade 9, and has helped his team to winning back to back Manitoba Provincial 'A' Boys Championships in 2012 and 2013.

In Grade 11, Hebel-Allard was recognized as a MHSAA 'A' Boys Provincial All-Star and earlier this year he participated in the Manitoba Basketball 'A-AAA' Boys Graduating All-Star Game hosted at Winnipeg's St. Paul's High School where he was selected to the second team All-Manitoba.

"Josh is a good play-making point guard," said head coach Billy Isaac, "He has the ability to drive into the key and find his open teammate. I am looking forward to getting him into training camp in September and really seeing more of what he can do."

Hebel-Allard represented his region at the 2012 Manitoba Summer Games on Team East-Man as a player only entering Grade 10. He is also a well-rounded athlete having participated in competitive baseball, curling and 10-pin bowling during his high school years.