Aidan Saunders of Calgary Signs with Bobcats for 2015-16 Season 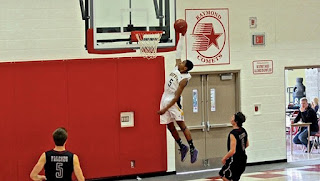 BRANDON – Bobcats men's coach Gil Cheung continues to round out the 2015-16 recruiting class, this time with the announcement of high school stand-out Aidan Saunders of Calgary who recently signed an official letter of intent with Brandon University.

Saunders is a 6-foot-1 guard from Calgary who made a name for himself as one of the elite point guards in Western Canada thanks to extreme athleticism and a high basketball IQ.

The three-year member of the Ernest Manning High School varsity squad helped the Griffins capture a consolation title in his grade 11 year and the team's best record in his grade 12 year at 9-1. He also made the Calgary Selects team for his grade 12 season and is a product of the Genesis Basketball Club.

Saunders has also made some spectacular highlight-worthy plays, demonstrating how he's prepared to make the jump to the university ranks.

"Aidan is a dynamic point guard who has the potential to be a solid contributor in Canada West," says Gil Cheung, head coach of the Bobcats. "He is an explosive athlete who excels in open court and will challenge for minutes as a freshman."

Coach Cheung isn't the only one impressed with Saunders' resume so far. His past coaches have high praises for the soon to be Bobcat as well.

"Aidan is a special player. He has that 'it' factor that he can bring to any team he is a part of," says Eddie Richardson III, Saunders' club coach with Genesis Basketball in Calgary.

"I personally believe under coach Cheung's tutelage, and the staff and support at BU, Aidan will excel in and out of the classroom. We are very proud that he has an opportunity to suit up for a great school with an impressive history."

The accolades for Saunders are in contrast to his humble and hard-working nature. His attitude and approach of hard work on the court and in the classroom will make him a great member of the Bobcats.

"I chose Brandon because of Coach Cheung's immediate confidence in me as a player and as a person. I believe that he and I share the same passion to win and I know that will carry over to the season," says Saunders.

"Coach Cheung did a great job recruiting this year to maximize the success of the team and I can't wait to be a part of that. I am looking forward to the opportunity to play against a high level of competition, the ability to join a team that suits my playing style, and lastly, being able to contribute to our team's success right away."