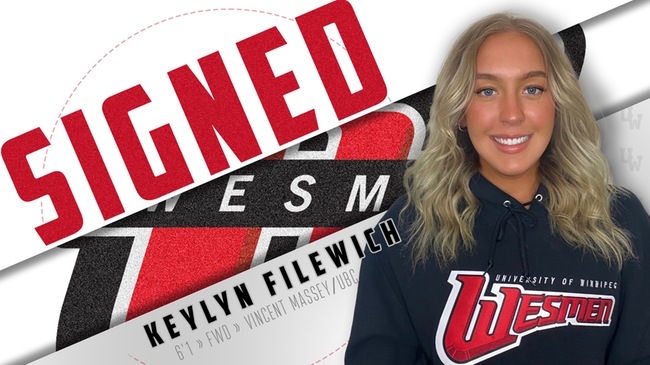 For the second time in the past three off-seasons, Tanya McKay is bringing an all-Canadian home to play for Winnipeg.

McKay, the head coach of the UWinnipeg Wesmen women’s basketball team, has landed the commitment of all-star Keylyn Filewich, a 6-foot-1 transfer from UBC, who was named a first-team all-Canadian and the Canada West player of the year in 2019-20.

Filewich, who will pursue her Masters in Management, will be eligible for the 2021-22 season and have one year of eligibility remaining.

Filewich was a second-team all-Canadian in 2018-19 and named to the conference all-rookie team in her freshman year out of Vincent Massey Collegiate in 2016-17.

She joins a Wesmen team that is loaded with talent with all-Canadian Kyanna Giles still waiting to play her first games in red after transferring from Regina in 2019, and all-conference forward Faith Hezekiah due back after missing nearly all of 2019-20 due to injury.

For Filewich, the thoughts of transferring from the only university team she’s known did not come lightly and only began surfacing when she returned home for holidays in December.

“I came back home and was talking with my parents about what do I do next year, what’s next year going to look like for me,” she said. “And they were the ones that said, ‘Hey, maybe you come back here, you play in front of your family for your last year … and a lot of good could come.’ And that was what tipped my interest and I thought this could be a path I never saw myself taking before but that kind of sparked my interest and it just snowballed from there.”

Filewich is a force in the paint, posting 14 double-doubles in 2019-20, a season in which she averaged 19.1 points and 10.4 rebounds per game in leading UBC to a 16-4 record and into the conference final four.

For her career with the T-Birds, Filewich averaged 15.8 points, 8.8 rebounds while shooting 58 per cent from the field and playing 77 of 80 games over four seasons.

In 2018, she set the UBC record for rebounds in a game with 27 against Victoria.

“Keylyn has proven to be one of the top forwards in U Sports women’s basketball during her time with UBC,” McKay said. “To say we are thrilled to add the caliber of player and person in that Keylyn s to our program is an understatement. Our team is excited Keylyn choose to finish her illustrious career with our program and we cannot wait to get started.”

McKay and Filewich have their connections, too: McKay played against Filewich’s mother Arlyn (Adam) Filewich in the late 1980s and then coached Keylyn on the Manitoba provincial team in 2013.

“I really admire her as a coach and … I feel like I have a strong connection with her, I think our goals align with what we see for the coming season and the expectations and values she puts on things,” Filewich said.

“… I can’t wait to play for her again and see what this year holds because I think it’s going to be special.”