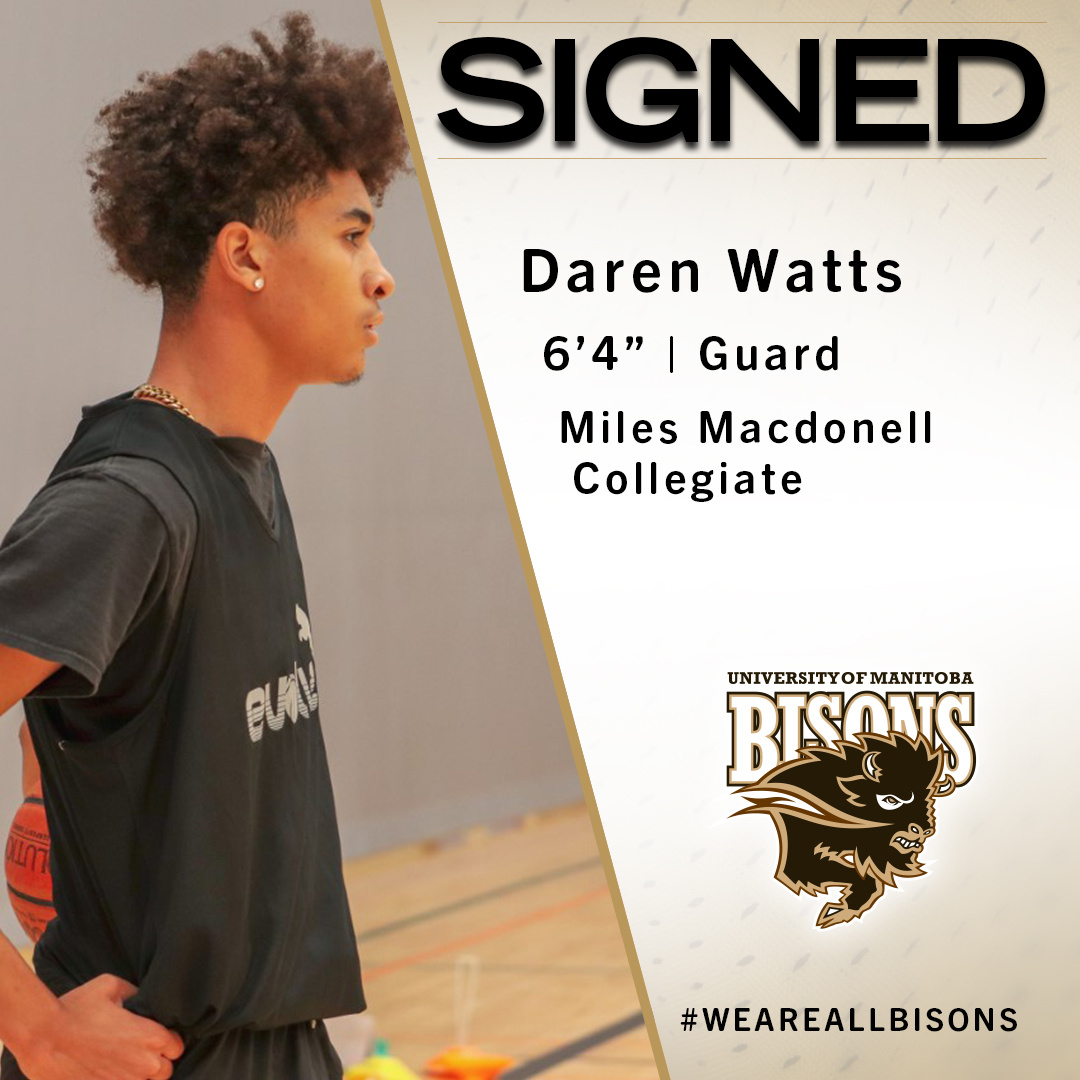 Bisons men’s basketball have announced the signing of local guard Daren Watts as part of their 2021-22 class.

Watts, 6’4”, 180, is a product of Miles Mac Collegiate. He was the highest-voted underclassmen in the Winnipeg Sun’s annual coaches’ poll in 2019-20, ranked at number two.

The well-rounded athlete was a force all over the court, averaging 32.5 points per game on 51.8 percent shooting from the field. He also shot 33 percent from distance. An outstanding defender, Watts tallied 9.7 rebounds per game, along with 2.1 steals per game and 2.8 assists per game. He was recognized at season’s end with an All-Manitoba selection.

“We are very excited to have Daren commit to the Bisons,” said Bisons head coach Kirby Schepp, who enters his 13th season in 2021-22.

“He was best scorer in Manitoba as a grade 11 player last season and we feel he has developed his game even further in the past year. He has great size for his position and can put the ball in the hoop in many different ways.  He checks all of the boxes for us a player, student and person. He will be a key piece of our program for the next five years.”

Watts is also a standout in the classroom. He’s been an honour roll student for all of high school, and is doing incredibly well in his senior year as well.

“Daren is one of the most skilled athletes, in any sport, to have gone through the athletic program at Miles Macdonell,” said Buckeyes head coach Jeff Shaddock.

“He is an incredibly hard-working young man, whose dedication to basketball is second-to-none. His high skill level is due mostly to the tremendous amount of focused time he spends working on his game. Daren is also highly coachable and competitive, and does well in the classroom. His academic average this year is above 80 percent and he is taking all IB (International Baccalaureate) course. He will be a fantastic addition to the Bisons basketball program.”

“I am excited for this opportunity to play for my home province with the UM Bisons,” added Watts.

“The program consistently produces high level players and is known for a family-like environment. That made UM the clear choice for me to build my basketball career. The mentality of hard work and determination that my family and coaches have instilled in me over the years gives me the confidence that I will excel in a program like this. So, let’s get started!”

Manitoba is coming off of a spectacular 2019-20 season which saw them finish 16-4 in the regular season (their best result season joining Canada West), along with a Canada West Final 4 appearance. The 2020-21 season was cancelled due to the COVID-19 pandemic.