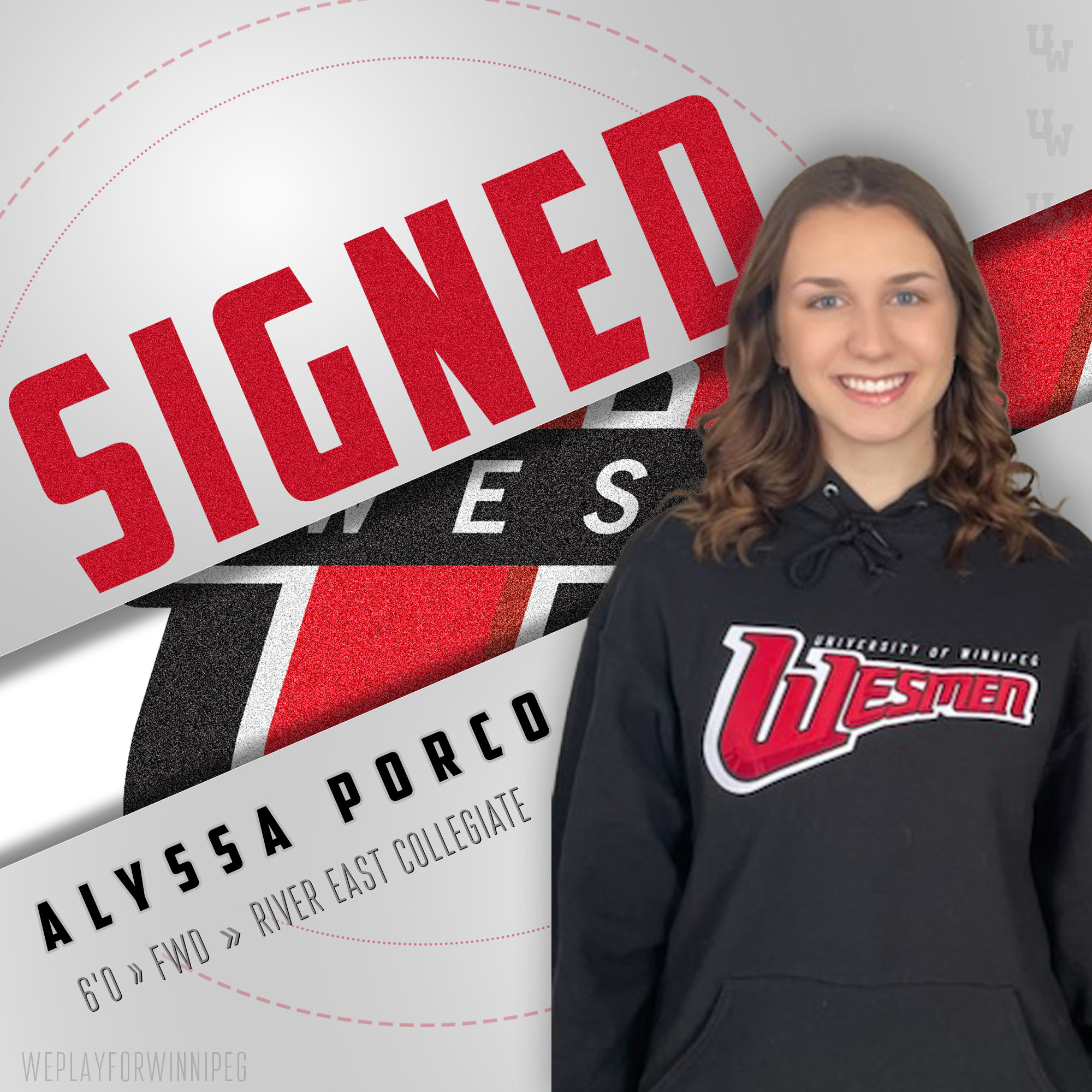 Alyssa Porco’s connection to the Winnipeg Wesmen goes back to her earliest days in basketball.

Now, thanks to her commitment to Tanya McKay’s Wesmen women’s basketball program, she’ll have five more years to continue it.

Porco, a 6-foot Grade 12 forward from River East Collegiate, is the first member of the team’s 2021 recruiting class, committing to McKay and the Wesmen just before the new year.

Porco will study Psychiatric Nursing and have five years of eligibility.

Porco is a former provincial team member who got her first taste of basketball camps in McKay’s popular I Can Score clinics. Years later, when it came time to decide where she would play her post-secondary ball, Porco knew she wanted to play for Winnipeg.

“The Wesmen, the U of W, was always one of the top schools I was interested in just because I have lots of experience with them,” she said. “My first basketball camp was an I Can Score camp with the Wesmen. That’s the first camp I remember attending. And I’ve always gone to their games so it’s kind of like I grew up in that gym. Just seeing that was what made the Wesmen one of my top choices. After getting all my information, it just hit me all at once that the Wesmen would be the best choice for me.”

Porco had interest from other Canadian universities, but chose Winnipeg.

She started for the Kodiaks at the varsity level in Grade 10 and 11 and, in those two seasons, averaged 25 points, six assists and 5.5 rebounds per games. She also averaged two steals and 1.5 blocks for coaches Christina Posthumus and Akida Lews.

“Alyssa is one of those special players who doesn't come around very often,” the coaches said in a statement. “She has tremendous natural ability and combines that with a dedication and competitiveness that will help her to succeed at the university level.”

She played for both the 15U and 17U provincial teams, twice alongside Class of 2020 recruit Maltha Uwambajimana.

Porco, who has played club for Fury, Manitoba Magic and most recently in Basketball Manitoba’s Targeted Athlete Program, set out on her recruiting trail towards the end of her Grade 10 year, she said, putting together highlight reels and reaching out to coaches.

At 6-feet, Porco has desirable size for the U Sports level, but she doesn’t shy away from stepping out and shooting the ball.

“I’m definitely a team player. That’s how I like to see myself,” she said. “I’m always looking to see opportunities to allow my teammates to score. I see myself as a three-point shooter, (and) someone whose really driven and motivated.”

Porco has tried her best to stay active and involved in the midst of lockdowns and cancellations due to COVID-19. She’s been in on Zoom calls with her future Wesmen teammates, which she said has been helpful.

“That’s really motivating to see all the other girls and see what my other teammates are doing, and trying to keep a positive mindset going,” Porco said. “Everyone involved in that team has been really welcoming. It’s just nice to be going into a new team like that knowing that there’s a lot of girls there supporting everyone else.”

McKay likes the versatility that Porco brings to her program.

“Alyssa will be a very good addition to our program,” she said. “Her size and skill set has her ready for playing at the U Sport level. Academically she is strong, she loves to train and is a great team player. We’re excited to have her part of our program.”