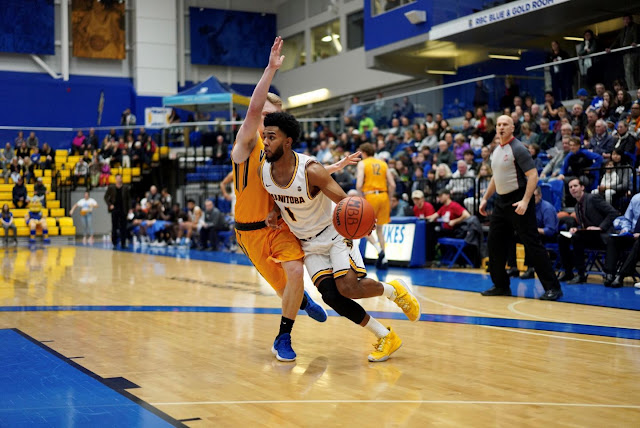 WINNIPEG – After a first-round bye, No. 10 ranked Manitoba Bisons men's basketball (16-4) head to Edmonton this weekend for the Canada West quarterfinal and potential semifinal rounds. Manitoba will play the Victoria Vikes (15-5) on Saturday at 12 p.m. MT.

The winner will advance to play either Alberta (19-1) or Lethbridge (10-10) on Sunday afternoon. All Canada West post-season basketball games are single elimination this season.

There's been plenty of history made for the Bisons men this season. Their 16 wins is the highest since the team joined Canada West as full members, while their U SPORTS ranking of No. 8 achieved in late January is the highest for the program in 25 years.

Heading into this matchup with the Vikes, there's recent history to look back on to help set up the playoff game. Manitoba and Victoria split their regular-season series on January 31 and February 1, played out on the coast.

The 82-74 Bisons loss to the Vikes on January 31 was the first in regulation for Manitoba in 2019-20, with two of their overall four losses coming in overtime. Outside shooting helped Victoria in the win, as they shot 5-for-10 from three in the fourth — including a 6-for-13 night overall from Scott Kellum — to get the win.

The leading scorer for the Bisons has been fifth-year guard Rashawn Browne. Fourth in Canada West with 19.6 points per game, Browne has shot over 42.9% in three of four games since returning from a lower-body injury on January 31. In the team's win over the Vikes on February 1, he poured in 34 points on 21 shots, including 5-for-8 from three.

After missing the last three games of the regular season due to an injury suffered against Manitoba, the Vikes got their leading scorer Matthew Ellis back for a play in win over Brandon (88-80). Ellis tied a team-high 18 points on 13 shots against the Bobcats and averaged 14.6 points per game during the regular season.

The team to advance from this weekend of play in Edmonton — Manitoba, Alberta, Victoria, or Lethbridge — will earn a spot in the Canada West Gold Medal Game on February 29 and an automatic berth in the 2020 U SPORTS Men's Final 8, hosted by Carleton and Ottawa.