Hall of Fame News: Manitobans Recognized as part of the USPORT Top 100 Players 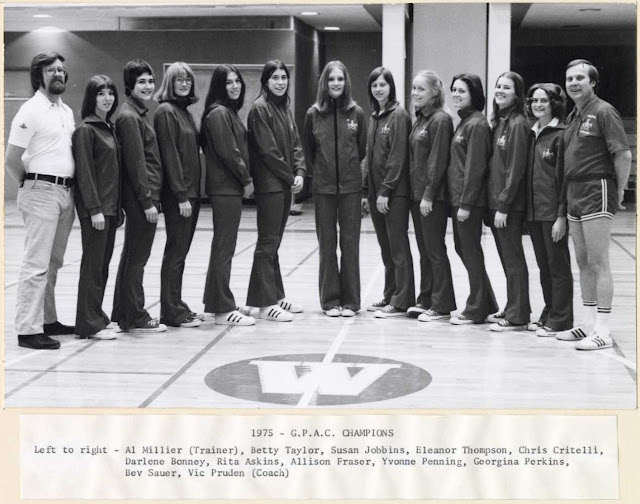 UPDATED: USPORTS has announced its Top 100 women’s basketball players of the century which includes a number with Manitoba connections.

“Selecting a group of individuals to represent excellence in your conference or league is always a difficult task,” said Ryan Thorne, president of the U SPORTS women’s basketball coaches’ association and head coach of the Martlets. “This experience has shown me that there have been some amazing young women, who have represented our institutions well through basketball that have gone on to become remarkable women in life. Just researching the stories and receiving the feedback from coaches of different eras, was eye-opening. I am grateful to have been a part of this process and hope that the next century is just as fruitful.”

Players that have a Manitoba connection on the Top 100 include... 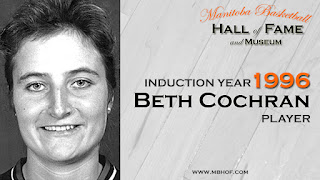 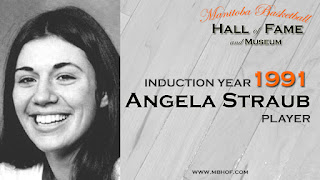 Angie Johnson Straub was a 4-time 1st-team all-GPAC and led the Wesmen to 3 GPAC championships. She also led them to provincial senior women's and national junior women's championships.  She is a member of the Manitoba Sport, Manitoba Basketball and Manitoba High School Halls of Fame. 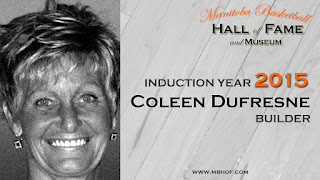 Coleen Dufresne came to Manitoba after a successful career as a player at the University of Ottawa and with Canada’s National Team. After coaching the University of New Brunswick, she accepted the head coaching position with the University of Manitoba Bisons Women’s team in 1984, a position she held for 17 years. In those years, she established the Bison women’s program as one of the best in Canada, winning three CIAU/CIS National Championships - 1988, 1996 and 1997 and two silver and two bronze medals. She was twice named National Coach of the Year in 1983 and 1998 and conference all-star coach seven times.

Chris Critelli (5th from left in the above team photo) is one of the most accomplished players in Canadian history. She helped UW to the 75 GPAC title & is the only player to win national titles in the NCAA (Old Dominion) and Canada (Laurentian). She went on to play pro and later coach the Brock Badgers 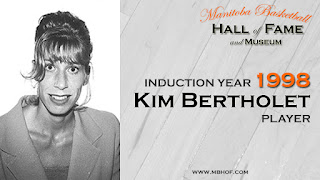 A graduate of West Kildonan Collegiate, Kim Bertholet played her university basketball at the University of Manitoba from 1985 - 1991. She was Great Plains Athletic Conference First-Team All-Star in each of the five years she played. She was Rookie of the Year in the 1985 - 1986 season. Kim was also a Canadian University All-Star from 1987 - 1997. A member of the Bison team which won the Canadian University Championship in 1988, Kim was the Tournament MVP.  Kim was a member of the Canadian Junior National Team from 1985 - 1987 and a member of the National Team from 1988 - 1992. 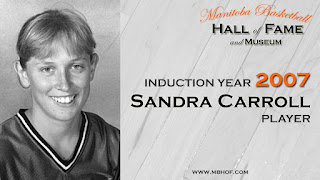 A graduate of John Taylor Collegiate, Sandra Carroll played her university basketball at the University of Winnipeg. A prolific scorer and skillful playmaker, Sandra was instrumental in the Wesmen winning 3 consecutive Canadian Interuniversity Sport (CIS) national championships. Sandra was a 4-time CIS All-Canadian in 1992, ’93, ’94, and ’95 and a 3-time CIS Player of the Year in 1993, ’94, and ’95. In 1994 and 1995, she was the CIS championship MVP.  Since graduating, Sandra has been playing professional basketball in Germany, where she is consistently a top scorer in the league. At the end of the 2007 season, she was the leading scorer in the German 1st Bundesliga. 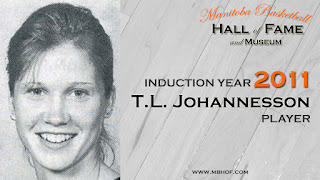 A graduate of Dakota Collegiate, T.L. Johannesson (Terri-Lee) played for the University of Manitoba Bisons. In 1991, she was the GPAC Rookie of the Year. She was a 3-time CIAU/CIS All-Canadian in 1994-95, 1995-96, and 1997-98 and the National Championship Tournament MVP in 1995-96 and 1996-97 where she led the Bisons to two consecutive national championships. She scored 30 points in the final in 1996. In addition, she won the GPAC scoring title in her graduating year when she set the Bison record with a 26.2 points per game average. 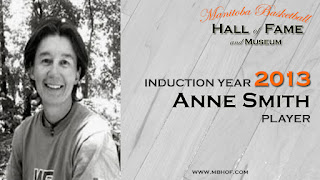 Anne Smith is a native of the Province of Quebec where she attended two high schools, Polyvalente Armand-Saint-Onge in Amqui and Polyvalente de la Foret in Amos before moving on to Cegep Montmorency in Laval. She then came to the University of Manitoba where she played with the Bisons for five years.  In her first year as a Bison, 1995-96, she was named to the CIS All-Rookie team. In 1997-98 she was named the winner of the Nan Copp Award for the most outstanding university player in Canada. She was a three-time CIS All-Canadian in 1997-98, 1998-99, and 2000-01. She was selected twice as the Player of the Game in the annual Bison-Wesmen Duckworth Challenge. In addition, during her career as a Bison she was a member of two consecutive CIS national championship teams in 1995-96 and 1996-97. 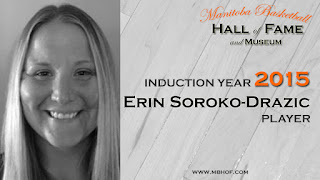 Erin Soroko is one of the best ever to play at the University of Winnipeg. After graduating from Miles Macdonell Collegiate in 1996, she began a five year career with the Wesmen that saw her establish herself as one of the top players in Canada. She was a three-time CIS / CIAU All-Canadian in 1998, 1999 and 2000 as well as being selected a three-time GPAC / Canada West All-Star. She was also the GPAC Player-of-the-Year twice and GPAC Most Valuable Player in her graduating year.   During her career, she scored 1483 points for an average of 17 points per game and collected 574 rebounds (6.6 per game). In both of these statistical categories she ranks in the top three in Wesmen history. She was named the University of Winnipeg Athlete-of-the-Year three times in 1999, 2000 and 2001 and an Academic All-Canadian. In addition, she represented Canada at the World University Games in Palma de Mallorca, Spain in 1999 and in Beijing, China in 2001. 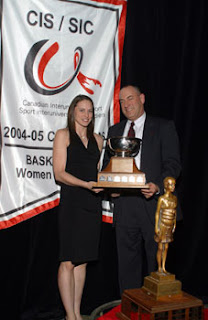 JoAnne Small (Wells) is from Bedford, N.S. and became the second Wesmen to receive the Nan Copp Award as CIS player of the year, after standout Sandra Carroll. In her final year with the Wesmen, she led the CIS in scoring this season with an average of 24.3 points per game and was also tops in the country with a 90.6 free-throw shooting percentage, which set a new single-season team record. The team co-captain was the heart and soul of the Wesmen as they claimed the Canada West Great plains regular-season title with a 17-3 record.  Wells, who was also selected to the first All-Canadian team for three consecutive seasons, moved into fourth place on the Wesmen all-time career scoring list at the time with 3082 points. Off the court, Wells was named an Academic All-Canadian in each of her five years at the University of Winnipeg.

Members of the Top 100 will then be honoured at the Final 8 during the national championship final, hosted jointly by Carleton University, University of Ottawa and Ottawa Sports and Entertainment Group.

Top 100 U SPORTS Women’s Basketball Players of the Century