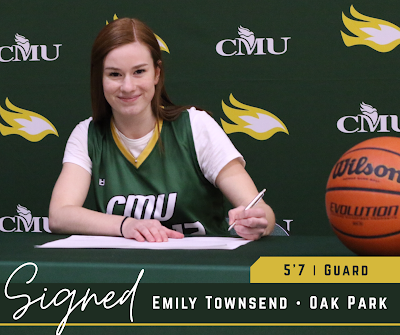 CMU Athletics has announced the commitment of Oak Park's Emily Townsend for the 2020-21 Northern Intercollegiate Athletic Conference season. The 5'7 guard is coming out of a very successful 'AAAA' girls basketball program with the Raiders, helping lead her team to a perfect high school season in 2019 that ended in a provincial banner for the west-Winnipeg high school.

A key player in her senior year at Oak Park, Townsend is now averaging over 15 points her game and has seen her team improve their Manitoba High School rankings with strong recent results at the St. Vital and Sisler tournaments. The Raiders now sit #4 in the province and are right in the race for another provincial title.

"We at Oak Park are very pleased to have Emily continue her basketball career at CMU this fall," said Raiders head coach Murray Brown. "Emily has been a valuable member of Oak Park for the last three seasons and is having a terrific senior year. In getting Emily, CMU gets not only a terrific player but a great person and student who has represented Oak Park admirably. She is an excellent shooter from the 3-point line and also does an effective job on penetration when teams choose to run her off the line."

Townsend played club basketball with Winnipeg Wolves up to 2017 before moving on to the Manitoba Magic touring team in 2018. Then for the 2018-19 season, the sharpshooter was part of the elite (C.P.) Centre for Performance program.

"Emily has a great basketball IQ, can really attack the basket and is very accurate from the 3-point line," added CMU head coach Joe Di Curzio. "Emily grew up watching her sister play for the Blazers so we are extremely thrilled to have her join our team too. Besides being a terrific player, Emily is a high-achieving student and a wonderful individual with great leadership skills."

Emily's older sister, Sarah Townsend played with the Blazers from 2015 to 2017 and was recognized as the program's Player of the Year in her second season.

CMU is in action this weekend with the Providence Pilots as NIAC's two 9-1 teams compete in a showdown for first place in both the US and in Canada's Manitoba Colleges Athletic Conference. The top-ranked NIAC program from Manitoba will receive a semifinal bye to the 2020 MCAC Championships held February 13th to 15th at Red River College.