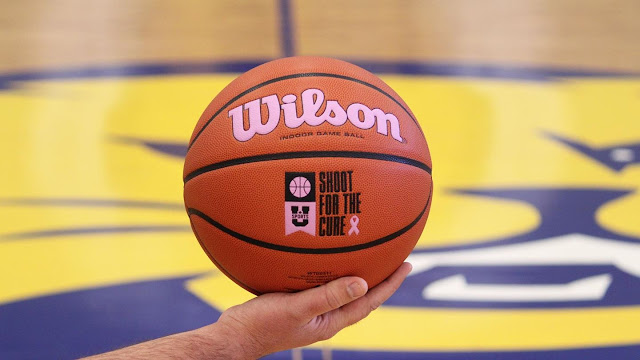 BRANDON, Man.  - The BU Bobcats women's basketball team will Shoot for the Cure this Saturday as the team welcomes the Thompson Rivers WolfPack to the home-game that serves as an annual fundraiser for the Canadian Breast Cancer Foundation.

"The Shoot for the Cure is an initiative that is near and dear to our team," says coach Novell Thomas.

"It's an awesome event for U SPORTS basketball and a great way to educate as well as raise funds and awareness for a disease that has affected us all in some way."

The Bobcats have partnered with the local Canadian Cancer Society office to provide a number of ways to raise money and awareness for breast cancer initiatives.

Fans can make a monetary donation at Saturday's game, or in advance to a member of the Bobcats women's basketball team. Members have pledge forms so that donations of $20 or more can receive a tax receipt.

A portion of this weekend's 50/50 proceeds will go to the cause as well.

All funds raised will go directly to the Canadian Cancer Society.

Fans and supporters unable to attend the game this Saturday can donate directly to the Bobcats fundraising initiative at this link http://convio.cancer.ca/goto/BUshootforthecure.

The Bobcats will be one of six U SPORTS schools taking part in the initiative this Saturday, while all women's basketball programs take part over the course of the season.

This year marks the 13th year that the U SPORTS Women's Basketball fundraising initiative has taken place and the ninth consecutive year for the Bobcats.

The Shoot for the Cure campaign has proven an overwhelming success since it was launched in the fall of 2007, with over $1.3 million in donations to date.

U SPORTS schools will raise money through regular season games in Canada West, the OUA, RSEQ and AUS, as well as other special events. A cheque will be presented to CCS – which merged with the Canadian Breast Cancer Foundation (CBCF) in February 2017 – during the gold medal game of the 2020 U SPORTS Final 8 Basketball Championships, hosted jointly by Carleton University, the University of Ottawa and the Ottawa Sports and Entertainment Group.