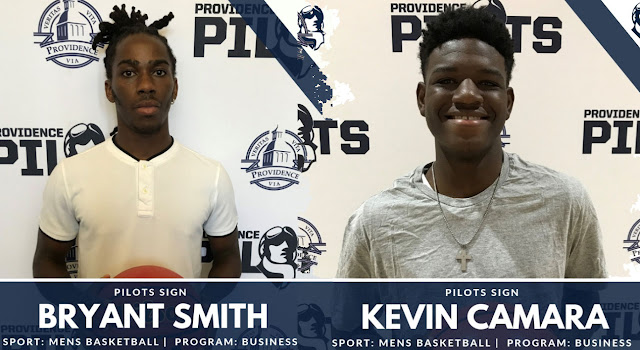 All the way from Miami, Florida, it’s in Otterbune, that Bryant Smith will pursue his College basketball career. After playing 2 years for Nueta Hidatsa Sahnish College in North Dakota, Bryant will export his talent and love for the game to his new home, Providence University College.

Pierre Dubreuil, Head coach says about Bryant “I’m extremely confident that his experience, basketball IQ and work ethic are going to contribute to the team success right away! Bryant is a mature player who knows how to keep his teammates engage and accountable during 40 minutes.”

Alongside Freshman Blake Garing, Bryant will take care of the ball at the point guard position. After signing his letter of Intent, Bryant said “I am excited to come to Providence because I want to be different and grow as a student, player and individual.”

Pilots sign six foot three Shooting Guard Kevin Camara to the men's basketball team. Head coach, Pierre Dubreuil has announced the signing of Kevin Camara for the 2019-2020 basketball season. From Minneapolis St. Paul, the six-foot-three shooting guard graduated in 2017 from Garden City Collegiate, Winnipeg, MB. After one year away from the court, Kevin Camara will be back in September under the Pilots colours.

"My expectation of Providence is to help grow my spiritual relationship with the Lord as well as being in a healthy environment to help me grow not just as a player but also as a man," said Kevin before adding that he's ready to battle to win a championship.

Coach Pierre commented on the newest recruit by saying, "Kevin is a sharpshooter with a strong mindset in defence. I’m confident that interacting with the returning players and working hard in practice are going to make him a really valuable asset to our lineup."