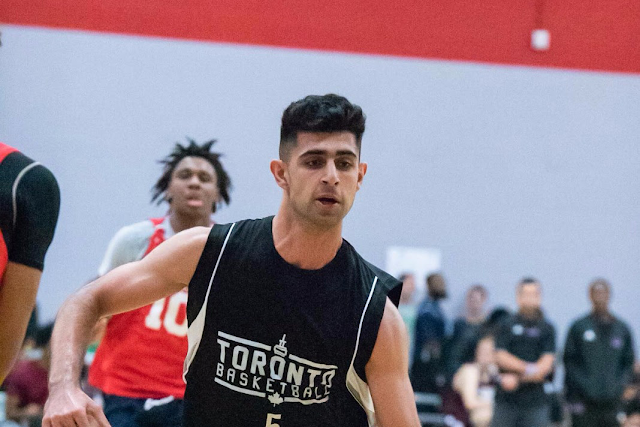 His former coach, his future coach and the man himself all trumpet Ihsan Khan’s versatility on the basketball court. And that’s a big reason he’s soon to be a member of the Winnipeg Wesmen.

Khan, a 6-foot-5 swingman from Hamilton, Ont., has committed to Mike Raimbault and the Wesmen men’s basketball program, becoming the second member of Raimbault’s 2019-20 recruiting class. Khan joins Vincent Massey’s Donald Stewart as members of a still-to-be-finalized ’19-20 class.
He will enroll in Business and Administration and have five years of eligibility.

“I knew for a long time that I wanted to play university (basketball),” Khan said. “Winnipeg has given me the opportunity and I really liked what I saw.

“(Raimbault) kept it really honest with me and he feels I’m the type of person who can come in and make an impact right away. He didn’t sugar-coat it or anything. He said ‘If you work hard and have goals you can reach whatever you want at this university.’

“That really stuck out to me.”

With TBA, Khan averaged 13.9 points and 6.2 rebounds per game, including a career-high 23 points earlier this season.

Raimbault spoke at length about Khan’s multi-faceted game, and Khan himself believes he can guard multiple positions on the floor.

“I think he has the chance to play a few different positions,” Raimbault said. “He brings a skill set that should be able to help us and he’s a guy that we can see continuing to grow year by year.”
So what kind of player are the Wesmen getting? Khan says, in a word, “Everything”.

“They’re getting a very versatile player,” Khan said. “I can play the two or three or four, maybe even the five. I like to get downhill, finish at the rim, space the floor, hit shots, make teammates better. Everything.”

“As Ihsan develops his motor, refines his skill set and athleticism, he will have an opportunity to be a strong contributor for years to come,” Jackman said. I have no doubt that Ihsan will be able to maximize his ceiling under Coach Raimbault. Ihsan has left behind big shoes at TBA.”

Khan is also a top-100 recruit on North Pole Hoops’ national rankings for the Class of 2019.