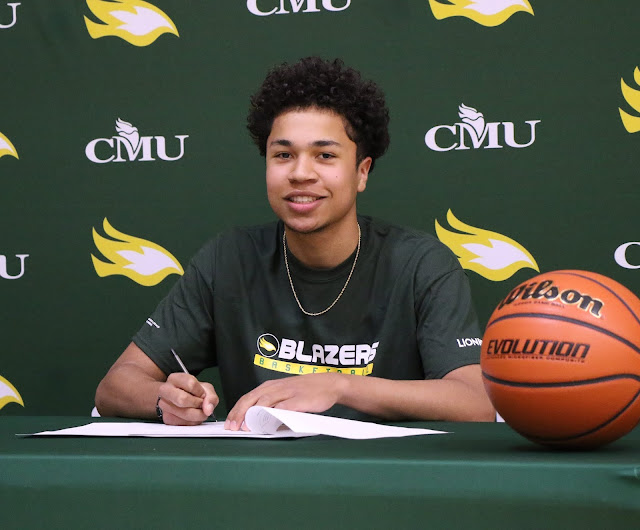 CMU Men's Basketball have announced the commitment of Winnipeg's River East Collegiate wing Isaiah Cole for the 2019-20 Northern Intercollegiate Athletic Conference season. At 6'5, Cole has the size and strength to play in the post and defend at the rim, but has proven through his high school career with the Kodiaks, that he has the athleticism to create his own shot, catch and shoot or put the ball on the floor and penetrate to score. In his grade 12 season, Cole led the Kodiaks in scoring, averaging a mind-blowing 45 points per game in the always tough Manitoba High School's KPAC division.

"Isaiah is a big, strong, athletic guard who played multiple positions for us throughout the season," said River East varsity boys head coach, Tyler Kohut. "He is a very strong outside shooter who has a natural ability to finish inside the paint. His consistent free throw shooting compliments his attacking presence and Isaiah made some significant strides on the defensive end of the ball as the year progressed."

Among the numerous Tournament All-star certificates and Player of the Game awards that the Kodiaks' talisman received during his high school career, being recognized by North Pole Hoops as one of Manitoba's High School Top Ten in 2019 and being selected Most Valuable Player in the Manitoba Basketball 'AAAA' Boys Graduating All-star Game last April, were two of Cole's greatest high school basketball accomplishments.

Cole had a one for the record books when he scored an amazing 61 points in a game to close out his high school career – a total that left him in third-place on Manitoba High School's all-time Most Points Scored in a single game in varsity boys basketball.

Off the basketball court, Cole excels in the classroom as an Honour Roll student at River East and has been involved on music, arts and public speaking. Cole also has a passion for competitive Martial Arts, earning his junior black belt in Tae-Kwon-Do at age 11 and on top of being a four-time Provincial Overall Grand Champion, Cole has won many medals at the National World Karate and Kickboxing Canadian Championships.