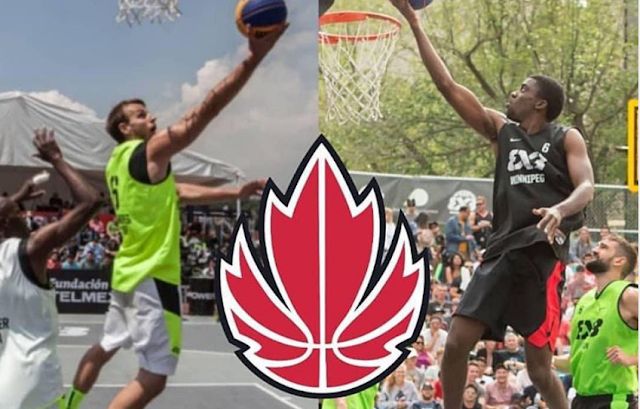 Basketball Manitoba is happy to share the news that Manitoba based basketball players Wyatt Anders and Jelane Pryce have both been selected to join the Canadian National 3x3 Basketball Team!  They will join Michael Linklater and Bikramjit Gill on the 4 team roster coordinated by Canada Basketball and be off to San Juan, Puerto Rico this weekend for the FIBA 3x3 World Cup Qualifier event in hope to then qualify for the FIBA 3x3 World Cup to be held later in Amsterdam on June 18-23.

The pools will be determined automatically through the 3x3 Federation Ranking of the participating countries as of Feb 1, 2019.  Canada has been placed in a pool with France and Germany.

More information on the qualifiers including the schedules can be found at... http://www.fiba.basketball/3x3WorldCup/2019/qualifier/Men/Canada.

The live video stream of the games can be found at... https://www.youtube.com/FIBA3x3

Both Wyatt and Jelane by been part of the Acceleration Performance 3x3 Basketball Team the last number of years and have travelling the world pursing their 3x3 opportunities.  This selection came from their ranking points history of which FIBA tracks and has now opened up this new opportunity for them both to represent Canada!

In 2020, 3x3 basketball will become a fully recognized Olympic sport when it will be part of the Tokyo games next summer.

Congrats to both Wyatt and Jelane and go Canada go!

TORONTO, ON. (May 1, 2019) – Canada has been granted a slot as a replacement team in the FIBA 3x3 World Cup Qualifier 2019 in San Juan, Puerto Rico on May 4-5 after FIBA announced Nigeria is unable to participate due to visa issues.

“Being able to represent your nation is one of the highest honours any athlete could receive,” Linklater said. “I am extremely grateful for this opportunity and we will do our best to make our country proud.”

This will be Linklater’s second time representing Canada internationally after the longstanding 3x3 veteran captained the team to a sixth-place finish at the FIBA 3x3 World Cup 2018.  Gill, originally from Toronto, is a member of Team Delhi on the FIBA 3x3 World Tour, while Pryce and Anders are teammates on Team Winnipeg and finished second at the 3x3 Canada Quest National Finals last year.  Combined, the team has over 400 games played between each member.

Canada replaces Nigeria in Men's Pool A along with France, Germany and Italy.

Teams are divided into two pools of four teams playing in a round-robin first round against their three respective pool opponents. The pool winners will directly qualify for the semifinals, while the 2nd- and 3rd-placed teams in each pool will play a quarter-final with the winners advancing to the semifinals.

The top 3 teams in each gender will secure their ticket to the FIBA 3x3 World Cup 2019, which will be held in Amsterdam, Netherlands on June 18-23.

The FIBA 3x3 World Cup 2019 is an important step on the road to the Tokyo 2020 Olympic Games as the medalists will automatically qualify for an Olympic Qualifying Tournament, which will be held in May 2020.