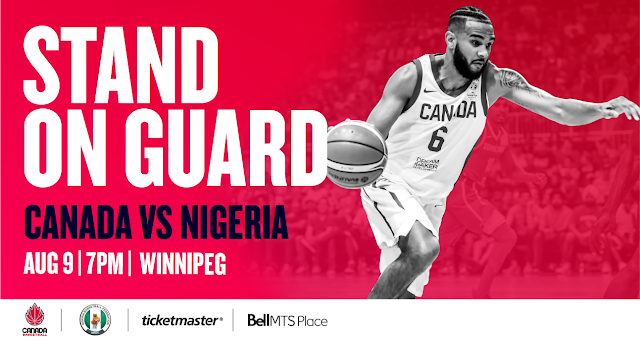 USE PROMO CODE 'mbhoops' TO SAVE 20%: Canada Basketball announced Monday that the Senior Men’s National Team will face Nigeria at Bell MTS Place in Winnipeg on Friday, August 9 at 7:00 p.m. CT, on the road to the World Cup.

This game will be an important match-up for both teams as they prepare for the FIBA Basketball World Cup 2019 in China (August 31-September 5, 2019).


It has been 20 years since Winnipeg has hosted an international competition featuring the Senior Men’s National Team, and Canada Basketball is proud to partner with True North Sports + Entertainment to bring the team back to the city. Team Canada returns to Winnipeg for the first time since a fifth-place finish at the 1999 Pan American Games. 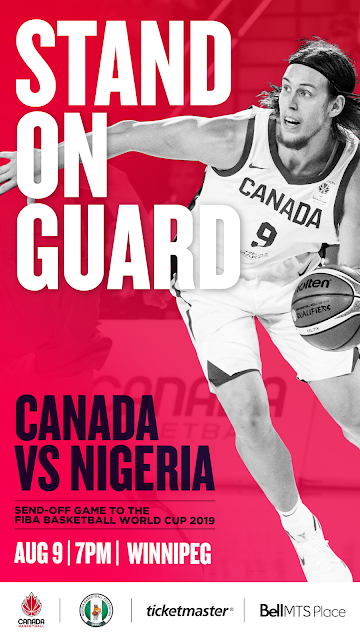 Canada’s roster will feature some of the country’s biggest and brightest stars, including athletes playing professionally in the NBA, NBA G League and several of the top professional leagues overseas.

Bringing Team Canada to Manitoba is an important strategic investment for Canada Basketball, as the organization continues to work to grow the game and inspire youth across the country. Since the FIBA Basketball World Cup 2019 Americas Qualifiers began in November 2017, the Senior Men’s National Team will have played games in six different provinces from coast to coast.

In addition to the August 9 game, Canada Basketball, in partnership with Basketball Manitoba, will also host clinics for both players and coaches. Details regarding both will be announced at a later date.

Canada is heading back to the World Cup for the first time since the 2010 FIBA World Championship after finishing the FIBA Basketball World Cup Americas Qualifiers with a 10-2 record to lead Group F. One of the fastest rising basketball nations in the world, Canada’s depth was on display during the Americas Qualifiers as 36 different players represented their country over the course of the six competition windows to qualify for the World Cup. 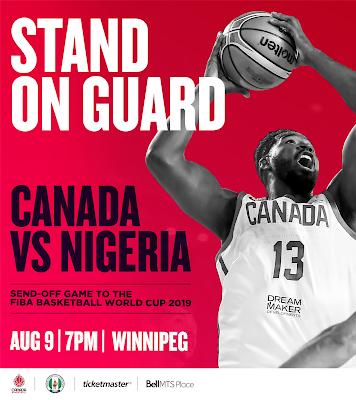 Canada last faced Nigeria in preliminary round play at the Gold Coast 2018 Commonwealth Games.
The FIBA Basketball World Cup 2019 in China (August 31-September 15, 2019) will be the biggest edition of FIBA's flagship event with a record 32 participating teams playing 92 games over 16 days.
Canada is in Group H along with Senegal, Lithuania and Australia for the FIBA Basketball World Cup 2019.

For the first time, the FIBA Basketball World Cup will qualify seven teams directly for the following year's Tokyo 2020 Olympic Games. Canada must finish either first or second in the Americas zone to earn a direct berth.

QUOTES
“This is going to be an exciting game against a talented and athletic Nigerian national team. Only a few weeks away from the start of the FIBA World Cup, our game in Winnipeg will be very important for our team’s preparation. I expect we’ll have Canada’s most talented team ever, with most of our NBA players proudly representing their country.” – Glen Grunwald, President & CEO, Canada Basketball

“True North is excited to bring Canada’s best basketball players to Winnipeg and to Bell MTS Place for a premier sporting event this summer. Team Canada vs. Team Nigeria is going to be a world-class athletic event that will allow Winnipeg fans to show their support for Team Canada and be a part of their journey as they compete to get to the World Cup.” – Kevin Donnelly, Senior Vice President, Venues & Entertainment, True North Sports + Entertainment

“The Manitoba basketball community is thrilled to host Team Canada this summer here in Winnipeg as part of their final preparations heading into the World Cup. Opportunities to host a game like this don't occur often and I know there will be a great outpouring of support from the community.” – Ross Wedlake, President, Basketball Manitoba