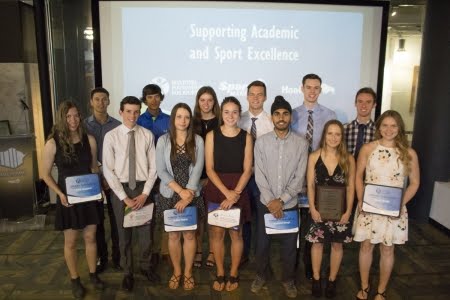 Sport Manitoba and Coaching Manitoba have announced a series of scholarship opportunities for athletes and coaches to apply for this spring.  The deadline for all is Friday, May 15 (unless otherwise noted).

A scholarship created in memory of Robert (Bud) Tinsley by his family and friends to recognize a Manitoba student-athlete who demonstrates similar leadership traits that were attributable to Bud. Bud was introduced to organized football in high school and his athletic career and contributions persisted from there. Bud had a reputation as a fearsome tackler and playing for the Winnipeg Blue Bombers from 1950-1960, serving as the perennial team captain and playing in Grey Cup championships in 1958 and 1959.

Recipients of this $500 scholarship will be selected from among the successful MFFS Scholarship recipients.

A scholarship endowment fund that provides financial support for Manitoba's high-performance athletes in their pursuit of excellence at the national and international levels of competition while serving as a tribute to commemorate the Manitoba visit of Her Royal Highness, the Princess Royal in 1999.

The Princess Royal Pan Am Scholarship awards two scholarships per year valued up to $3,000 each to one male and one female high-performance athlete enrolled in a post-secondary institution in Manitoba.

A scholarship program administered by Sport Manitoba is pleased to administer the Fleming Family Hockey Coach Scholarship supported by Jennifer Fleming. Jennifer created the scholarship, in memory of her father Jake Fleming and her brother Wayne Fleming, to recognize an upcoming Manitoba hockey coach who shows similar coaching and leadership traits that were characteristic of both Jake and Wayne.

The scholarship is presented annually to a student(s) who demonstrates a commitment to coaching hockey in Manitoba.  The scholarship(s) value may reach up to $1,200 and will be applied to the tuition of the recipient(s).  The number and amount of scholarships awarded annually will vary at the discretion of the selection committee based on the depth of applicants.

A bursary presented to four students who have demonstrated a commitment to coaching in Manitoba. Our goal is to encourage students to continue coaching while attending a post-secondary institution. Students who are, or will be, enrolled in the upcoming school term in post-secondary education and currently coaching for a school, club or community centre are invited to submit an application.