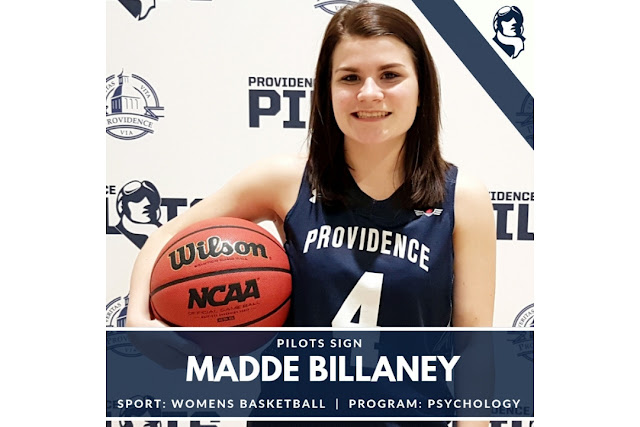 The Providence Pilots have announced the commitment of Madde Billaney to the women’s basketball team for the 2019-2020 season.

Madde has strong basketball roots based out of a dominant Boissevain program which won single A provincials last year. Her family moved to Winnipeg this past summer and she joined the Fort Richmond Collegiate women’s basketball team. Fort Richmond qualified for AAAA provincials but were bounced in the first round by Daniel McIntyre. While at Fort Richmond, Madde was a starting guard and averaged 8 points, 3 rebounds, 7 assists and 5 steals per game with a 45% shooting percentage from the 3 point line.

Fort Richmond Collegiate women’s coach Allison Laferty believes “Madde is an extremely dynamic and impactful player and has the ability to change a game as soon as she steps on the court. Her speed, agility, and 3 point shooting skills are just a few of the key dynamics that she brings to the game along with her quick and all around understanding of the game.” Laferty adds that “Madde’s ability to force turnovers and scoop and score are also second to none.”

“Madde is an intense and aggressive player. She plays many other sports which have helped to make her a very well rounded athlete.” Commented head coach, Joel Coursey. “We are excited to add this feisty guard to our family and we know that she will make a great addition to an already great program. It's easy to get a good feeling about a player from the quote she gives when signing. Madde is going to fit in perfectly!”

Madde will be joining the Providence community to study in the Psychology program. Madde had this to say about joining the Pilots family, “The warmth and comfort I felt with this program was unbelievable. I’ve played on many teams, with many different teammates. This was the first where they welcomed me in calling me their family.”