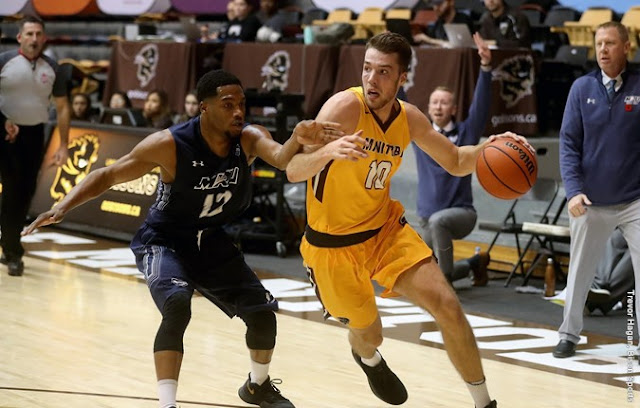 Third-year forward James Wagner has been named the 2018-19 Student-Athlete Community Service Award winner in Canada West. He will move forward as the conference's nominee for the 2019 Ken Shields Award in U SPORTS.

The Ken Shields Award is presented to reward excellence in the student-athlete. The recipient exhibits outstanding achievement in three areas: basketball, academics and community involvement. The selection is made by the U SPORTS Men's Basketball Coaches' Association.

Wagner, 20, is the first conference nominee for the Ken Shields Award since Bison men's basketball joined Canada West play in 2000-01.

"This is a great honour for not only James, but for our program. I think it says a lot that he's the first in the history of the Bison men's basketball program in Canada West to win this prestigious award and it couldn't happen to a more deserving young man," said Bison men's basketball head coach Kirby Schepp.

"James is the epitome of what a student-athlete is and what, I think, what U SPORTS is all about. He obviously performs incredibly well at every stage and we're very proud that James is a model for our program, for Bison Sports, and for what a U SPORTS athlete should be."

On the court, the versatile forward averaged 14.2 points (27th in the conference) and 6.5 rebounds per game (22nd in the conference), playing in all 20 games for the Herd. He was also 14th in the conference with 14 total blocks. He was named Bison Athlete of the Week on November 19 after a 26-point performance against the Regina Cougars.

In the classroom, Wagner has achieved Academic All-Canadian status in both his years of eligibility with Manitoba (2016-17, 2017-18), with an average GPA of 4.25. This year, he averaged a 4.5 GPA (A+) in the fall term while in an intensive pre-Medicine stream of courses.

In the community, Wagner has been a volunteer in many places around Winnipeg. He has volunteered with the men's basketball team at Siloam Mission, which provides meals, clothing, housing and resources for homeless people in the core area of the city.

Wagner is also a volunteer at Deer Lodge Centre Nursing Home, where he is the recreation volunteer, organizing and administering activities, holiday events, parties and recreation programs for high-need senior citizens.

Wagner is also active in the charity work of the University of Manitoba Athletes' Council (UMAC), helping to organize community outreach that includes Bison Book Buddies and Bisons Against Bullying programming at local schools.