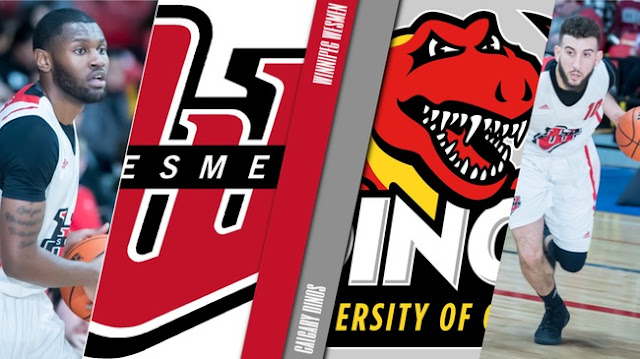 The Winnipeg Wesmen had their finest conference season in a quarter century and their reward is getting a team that hasn't lost a conference game in over a year.

The Wesmen men's basketball team, fresh off a dominating win over Manitoba in the play-in round of the Canada West playoffs, has the task now of trying to take down the No. 2-ranked Calgary Dinos in a best-of-three quarter-final series that starts Friday in Calgary.

The Wesmen finished the season with a 13-7 record, their highest win percentage since the team went 13-5 in 1993-94 while still part of the former Great Plains Athletic Conference.

But now they get the Dinos, the defending national champions and No. 1 seed in the conference, who finished 20-0 for the first perfect conference season in program history.

"I think we've taken it just like all the previous weeks in terms of preparing, looking at the things they do, the things that we need to do and trying to get ready to play our next game," Wesmen head coach Mike Raimbault said. "Their ability to impact games on both sides of the ball is huge. Defensively they're very disruptive and they create a lot of offence through their 'D'. They got a lot of talented individual defenders and as a group they're extremely disruptive at times."

One of Raimbault's focal points for the Wesmen will be keeping the Dinos off the glass. Brett Layton, a very senior junior, led the conference in offensive rebounds with 91 and averaged 16.9 points and 9.4 rebounds while shooting 59 per cent from the floor. Layton, a transfer from Mount Royal, took two years off after high school before attending MRU for two seasons then sat out the 2017-18 season to come to Calgary.

"I think we've got to attack their pressure together and collectively, and take care of the ball," Raimbault said. "I think as long as we're able to get into the front court and get some quality possessions we'll be OK. If they get creating deflections and stops and running out in transition that's when they're the most dangerous.

"We gotta find a way to keep them off the offensive glass. They got a tough task on the O-glass in terms of Layden … so that will be a collective effort and a challenge for us. We also have to play our game and play with confidence."

ABOUT WINNIPEG
G Narcisse Ambanza finished .1 point ahead of F Sean Tarver for the team's conference scoring leader ... Both Tarver (15.1 in 17-18) and Ambanza (15.7) averaged career-highs for points. Both also had career-highs in rebounds ... The Wesmen finished the season third in Canada West in points per game (91.8) ... They scored 100 or more points in a program-record six conference games .... The Wesmen finished second to Lethbridge by .2 in 3FG% (34.4)

ABOUT CALGARY
The Dinos were tops in Canada West in points allowed per game (66.0) and opponents' field-goal percentage (36.9) … The Dinos' 20-0 record was the first perfect season since the UBC Thunderbirds went 20-0 in 2005-06. UBC went on to lose the conference championship game and finished in sixth place at nationals with a 1-2 record … The Dinos played 13 pre-season games — 10 of them internationally in Costa Rica and Germany — and added five more non-conference games during December holidays. In total, they've played 38 (29-9) games since August 2018, the most in the nation.

PAST RESULTS
The two teams did not meet in 2018-19. Calgary swept the Wesmen in two games in November 2017 in Calgary.