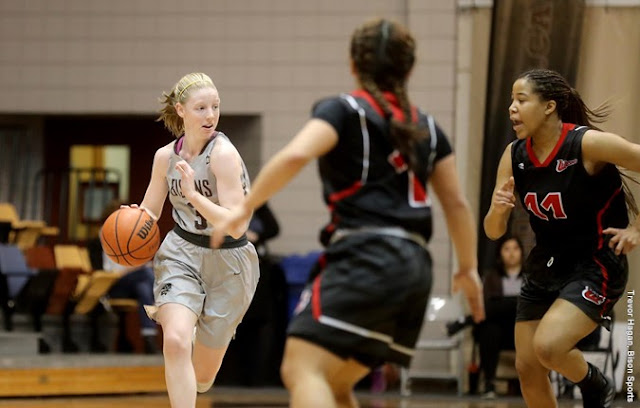 For the second consecutive year, Bison women's basketball head coach Michele Sung and her squad will be making a trip to the post-season.

The team – which finished the regular season 8-12 – will be the 11th seed based on RPI and travel to face the sixth-seeded Lethbridge Pronghorns in a one-game play-in matchup tonight at 7 p.m. CST.

It's the second year in a row that Manitoba will head to Alberta for the play-in, however, the squad is looking for a better result than last year, when they fell to the Pandas 81-72.
"It doesn't add pressure, I think it takes it away," Sung said of the team's return trip to the post-season.

"It just allows us to say, okay, we've got to get the job done on Friday. We've played really well on the road this year so I'm excited about that."

Manitoba and Lethbridge didn't meet this year, however, the Bisons swept the Pronghorns at home during the 2017-18 season with victories of 87-73 and 82-59.

The rosters for both squads are relatively similar to 2017-18, with the one big exception for the hosts being the addition of Latvia native Asnate Fomina, who's spent the last four years playing for Fordham University in the New York. She's averaged 10.7 points per game this season as a strong complement to fellow guard Kacie Bosch, who led the team with 15.1 points on 48.4% shooting.

"Our personnel hasn't changed a tonne either and we had a tonne of success against them last year," Sung said.

"We just have to have a game plan for the one impact player that they did get this year. And then from there, I still think it comes down to what do we need to do well to win. I think we're due for a good shooting game, so I think we can rely on that too. I'm excited. If I looked at all the possibilities of matchups coming into this weekend, this is one that I was definitely excited about."

Manitoba's big three of guards Nicole Konieczny and Taylor Randall and forward Emma Thompson combined for 117 points in the two-game series against the Pronghorns last year and they've been just as hot in 2018-19.

Randall leads the team in points per game, with 16.7, while Konieczny – who set a women's basketball program record (since coming to Canada West) with 41 points in the game two contest against Lethbridge – is putting up 13.7 points and 7.3 boards per contest. Thompson, an Alberta native, is averaging 9.4 points at the forward position, however, she's scored 11.3 over her last four contests and has also recorded four or more made threes in five different games.

"They're like my family, so we're really excited," Thompson said of feelings amongst herself, Konieczny and Randall. "We hold each other to a high standard, so I think as long as we're all on, we should be good."

Another key factor will be rebounding. The Pronghorns are fourth in the conference in that margin (+7.3), while Manitoba is 14th (-7.5). Lethbridge is led by Kacie Keith, who averages 9.3 boards per game, however, she'll have a tough task in Manitoba senior Claire Harvey. She gets 7.3 rebounds per contest while also posting 40 blocks overall – good for second in the conference.

The winner of this single elimination play-in game will advance to the best-of-three Canada West Quarterfinals, taking place Feb. 14-17.