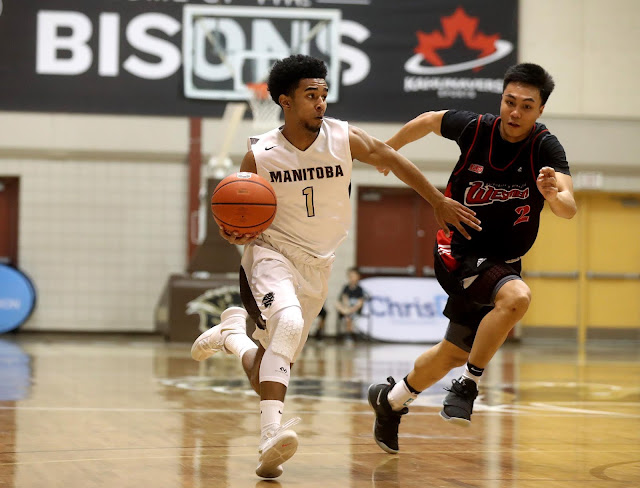 Third time will be the charm this Thursday when the Manitoba Bison and Winnipeg Wesmen men's basketball teams do battle in a one-and-done first-round playoff matchup at the Duckworth Centre at 7 p.m.

These two teams met last weekend in the final series of the regular season, earning one win a piece – including a come-from-behind 81-78 victory for Manitoba in Saturday's rematch.

Despite the split, the Wesmen still finished the regular season with a 13-7 record, good for an eighth-place finish in the conference RPI seeding. Manitoba went 7-3 in the second half of the year and 10-10 overall, putting them ninth in the RPI.

The energy for this contest is sure to be just as high as last weekend, as there are tons of local players on each side that will be looking for provincial supremacy.

"Any time you play a rival hometown team in the playoffs it's obviously a big deal for bragging rights and what not," said third-year forward James Wagner, who was second on the team with 14.2 points per game this season and has also shot better than 40% in all but one game during the back half of his team's schedule.

"I grew up and played with a lot of the guys who play for the U of W and one of my best friends plays for the team, so obviously it means a little bit more than any other team."

In order for Manitoba to walk out with a win, they'll need to restrict the production of third-year guard Narcisse Ambanza and fifth-year forward Sean Tarver.

The former had a double-double with 15 points and 12 rebounds in the Wesmen's victory last Thursday, while the latter had 30 points, including six threes. Sharp-shooting guard Don Dayrit is another player to watch coming off the bench for the U of W. He had 30 points combined against the Bisons, including a 4-for-9 showing from beyond the arc in the Saturday loss.

"But that's one of their problems, is that they put so many shooters on the floor that it's very, very tough to key in on guys without giving up wide-open catch and shoots from some of their role players."

Manitoba has flexed their muscles defensively – especially down the stretch – finishing fourth in the conference in opponents' field goal percentage (39.4%) as well as second in blocks per game, with 3.9.

Senior forward Malik Irwin – a key rebounder for the team – was a big factor in those numbers and had 11 points and seven rebounds in the Saturday win. The continued growth of second-year post Isaac Miller-Jose and third-year guard Kieran Zziwa has also played a role.

The former has recorded 13 blocks in the second half of the season while averaging 15 minutes per game as a key 1-2 punch with fellow big-man Cam O'Hara. The latter has been a stable force in Manitoba's starting five since early November and has been even more critical following the Christmas break, after a tough injury to fellow guard DJ Jordan Jr. He's tallied 31 steals this year and is a big part of Manitoba's active defence.

"Kieran is starting to become a little bit more aggressive and can certainly become an instigator defensively," Schepp said.

"He's starting to disrupt things a little bit for the other team but he's also starting to knock down the three a bit more and being a bit more assertive offensively, which I think is something that we definitely need him to do. He's certainly going to be a key piece for us Thursday night."