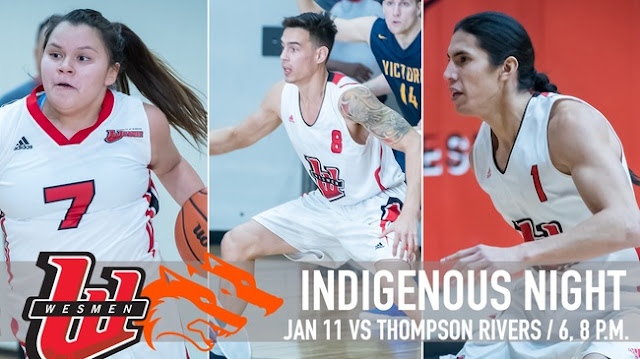 The University of Winnipeg and Wesmen Athletics have announced details on a night celebrating the Indigenous people and culture that contribute to our campus and teams.

In conjunction with the U of W Aboriginal Students Council and Anishinabe Pride Basketball, the fourth annual Indigenous Night will take place Friday, Jan. 11 for the Wesmen basketball games against the Thompson Rivers Wolfpack.

A blessing will take place at 5 p.m. at the Duckworth Centre with the women's team tipping off at 6 p.m. and the men tipping at 8 p.m.

"Indigenous Night has become an important date on the Wesmen Athletics calendar and we are excited to once again celebrate and honour our connections to the Indigenous people and community," U of W director of athletics Dave Crook said. "We are proud to partner with the likes of the Aboriginal Students Council and Pride Basketball, both groups that do important and vital work on our campus and in our neighbourhoods. We look forward to another tremendous night celebrating connections to such an important community."

Three members of the Wesmen basketball teams have served as role models in their indigenous communities: