SESSION 4 IS SOLD OUT!  OTHER SESSIONS HAVE LIMITED SPACE REMAINING.  Basketball Manitoba is pleased to announce details of its upcoming Spring Break High-Performance Camps for boys and girls ages 10-15 to run Monday, March 25 to Friday, March 28, 2019.

A set participation cap per camp is in place so register now!  Deadline to register is FRIDAY MARCH 22 at 4:30 pm or when the camp sells out! The camps have sold out the last 4 years, so register now to avoid disappointment.

The girl's sessions will be lead Basketball Manitoba High-Performance Coach Randy Kusano along with other support coaches.  See biography below.

Randy Kusano, High-Performance CoachRandy Kusano was the winningest coach in the history of high school basketball in Manitoba. His high school teams won three MHSAA (Manitoba High School Athletic Association) AAAA Provincial Championships provincial titles, 11 conference titles and he coached in 15 AAAA Final Fours in his 34 years coaching with the Oak Park Raiders in Winnipeg before retiring from teaching in 2010. A University of Manitoba graduate, Kusano is a current fully certified NCCP Level 3 coach with nearly 25 years of CIS coaching experience as an assistant with the Bison men’s and women's basketball program.Randy has been involved in basketball as a player and coach for over forty years. He developed his love for basketball at Norberry Junior High in St. Vital playing for Hall of Famer, Dennis Alvestad. He moved on to Glenlawn Collegiate and finally to the University of Manitoba.  Randy was a member of three consecutive Canadian Junior Men’s championship teams from 1971-1973. In 1976 he was a member of the first Manitoba team to win a National University championship in basketball, the University of Manitoba Bisons.After his university years were done he continued playing with the Nicolett Inn Senior men’s team that captured their first National Senior Men’s Championship in 1979. The University of Manitoba Junior Men and Nicolett Inn Senior men’s teams were later inducted into the Manitoba Basketball Hall of Fame.Randy’s coaching career began with the University of Manitoba Junior Bisons in 1974 and continued there until 1976. He has coached high school basketball for the past thirty-four years, thirty-two as head coach of the Varsity Boys program at Oak Park High School.Over his 34 years at Oak Park, Randy developed the dominant high school program of its era, going to 15 Final Fours and winning 3 AAAA Provincial Championships. During this time he has helped to develop more than twenty-five players who have gone on to play at the Canadian College or CIS level. Randy has also served as an assistant coach at the University of Manitoba for fifteen years.Randy has also coached numerous Manitoba Provincial teams as a head coach and as an assistant coach at the Canada Games, Western Canada Games, and National Championships.

Each head coach will have support coaches with them from their respective programs.

Prior to that, Raimbault spent the 2007-08 season as the interim head coach of the Brandon Bobcats, where he led the team to a 20-2 record in the Canada West.

Through his first eight seasons at Winnipeg and one year at Brandon, Raimbault compiled an overall record of 167-141. 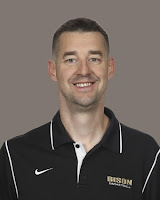 Bison men's basketball head coach Kirby Schepp has coached more than 50 different teams over the past 23 years and 13 at the U SPORTS level. He completed his ninth season at the helm of the Manitoba Bisons in 2017-18 and has steadily brought the Herd back into national contention.

Coach Schepp has been a part of the Canadian Men's National Team Program for the past eight summers. In 2009, Schepp was named to the staff of the inaugural Canadian Cadet (17U) National Team. He has been a coach of numerous medal-winning teams at FIBA events including a bronze medal at the 2010 World 17U Championships and a gold medal with the Junior National Team at the 2017 World Championships. This past summer, Schepp also led Canada to a historic silver medal at the Gold Coast Commonwealth Games.  The medal was Canada's first in men's basketball at the games.

Inquires and questions on the Basketball Manitoba High-Performance Camps
can be made to Dan Becker.