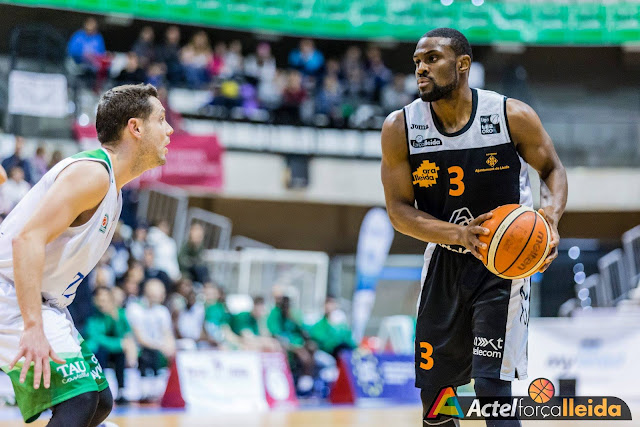 TORONTO, July 5, 2018 – Slan Sports Management has announced that Jarred Ogungbemi-Jackson has signed a one-year contract with Aix-Maurienne Savoie Basket of the French Pro B League for the 2018-2019 season.

Ogungbemi-Jackson, a 5’10” point guard, is coming off a strong 2017-2018 season with Forca Lleida in the Spanish LEB Gold League. In 34 appearances, he averaged 13.5 points, 4.1 rebounds, and 3.1 assists while ranking fourth in the LEB Gold League in three-point percentage, shooting 48.1% from beyond the arc.

A Winnipeg, Manitoba native, Ogungbemi-Jackson attended Garden City Collegiate, where he was named Most Outstanding High School Player in Manitoba, leading his team to back-to-back provincial titles in his junior and senior seasons. After graduating, Ogungbemi-Jackson began his collegiate career at the University of Calgary in the Canada West Universities Athletic Association (CanWest) of USports. Ogungbemi-Jackson was an impact player immediately at Calgary, averaging 10.3 points, 3.4 rebounds, and 3.3 assists in his rookie campaign while helping the Dinos to the USports Semi-Finals and the CanWest Finals in 2010. In his fourth season, he averaged 20.6 points, which was fifth best in USports, 7.0 rebounds, and 3.5 assists. In his final season at Calgary, Ogungbemi-Jackson averaged 19.3 points, which was 12th in the USports, and 5.2 assists, good for sixth in USports. He completed his collegiate career with two All-CanWest First Team selections and one All-CanWest Second Team selection, to go along with a 2015 All-USports Second Team selection.

Ogungbemi-Jackson also has experience on the international stage. He competed in the 2009 selection camp for Canada’s Junior National Team, and represented Canada at the 2015 FISU Summer Universiade in Gwangju, South Korea.

Ogungbemi-Jackson is excited for a new challenge with an Aix-Maurienne club that finished 11th in the French Pro B standings last season.

“I’m very excited and grateful for the opportunity to be joining Aix-Maurienne this season,” said Ogungbemi-Jackson. “I plan to give my all to the club and our supporters to help us achieve our goals and have a successful year.”

For more information and individual box scores for Jarred throughout the season, visit http://slansportsmanagement.com/jarred-ogungbemi-jackson.