PUBLISHED ON May 15, 2018 Commitments, Headlines, Wesmen, 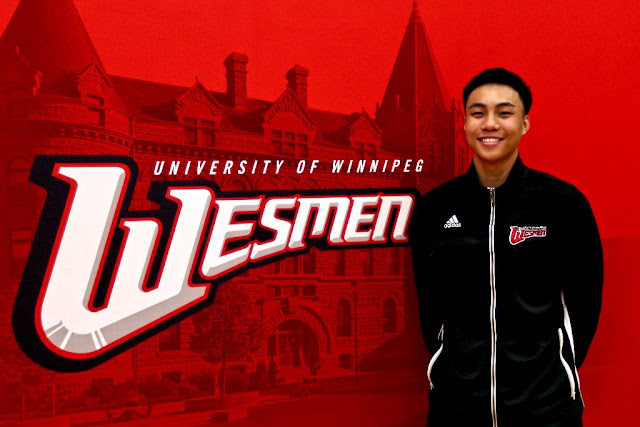 Joseph Medrano is crossing town and coming back to his true love in the process.  The Sisler High School graduate, who took two years off from university basketball, has chosen Mike Raimbault's Winnipeg Wesmen program to resume his post-secondary playing career.

Medrano, who spent one season with the Manitoba Bisons, was officially announced as the latest recruit to the Wesmen men's basketball 2018-19 recruiting class.

The 6-foot shooting guard stepped away from the game following the 2015-16 season and took two years off to focus on life away from basketball. In the end, the lure of the game he loves was too strong to fight any longer.

"The main reason for me leaving (the sport) was me falling out of love with it," Medrano said. "Just taking that time off helped me realize that was a big part of my life. Taking away basketball would be like taking away a good half of my life because that's what I dedicated myself to."

Medrano has been taking courses at U of W and Raimbault continued his pursuit throughout the year.
"Coach Raimbault was keeping in touch with me throughout the year, asking me to come try it out, come to practices, see what it's like," Medrano said. "I thought about it at the end of the school year and said 'Why not?'"

"He's a guy that's played some high-level ball, he's skilled, he knows how to play the game," Raimbault said. "I think his experience gives him an idea of what to expect going in. We've seen some of the things that he's capable of doing so we have a high expectation for him as well."
Medrano's name is well known through Manitoba basketball circles after standout seasons leading the Sisler program to back-to-back provincial final fours. Medrano led the Spartans, with current Wesmen guard Denzel Soliven, to the provincial semifinal in his Grade 12 year in 2014. That same spring he was named the province's AAAA male player of the year.

In 2013, Medrano was a tournament all-star in leading an underdog Cinderella Spartans team that started the tournament as the No. 8-seed and upset No. 1 St. Paul's in the semifinal. Medrano, as a Grade 11 guard, went on to score 31 points in a narrow loss to Garden City in the provincial final.
Medrano made appearances in two of the Winnipeg Sun's annual coaches rankings of the top players in Manitoba, ranking second in 2014 and eighth in 2013.

Medrano also has a history with the provincial program, helping Manitoba to a silver medal in the 2013 Canada Summer Games.

Raimbault said Medrano will add to the depth at guard for a team that likes to play with pace and isn't afraid to shoot the ball.

"We have a pretty good amount of depth at the guard spot, but he shoots it at a really high clip," Raimbault said. "I think he's a guy that's going to step in for major time right away. His ability to space the court and make plays on the ball and off the ball will be big."