PUBLISHED ON May 04, 2018 Bisons, Commitments, Headlines, 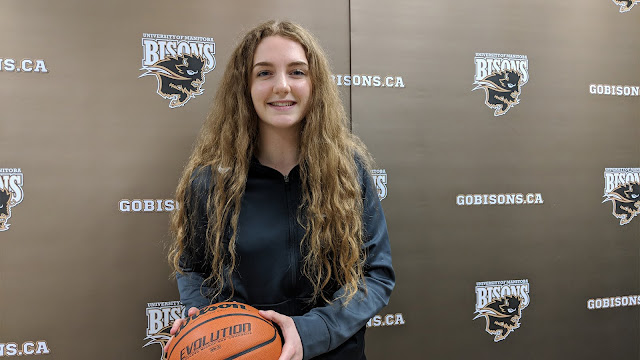 After making it to the Canada West playoffs last season, Bison women's basketball continues to improve for 2018-19 with the recruitment of forward Emerson Martin.

Bison women's basketball coach Michele Sung talked about Martin. "Adding Emerson to our team is exciting and shows the strides our program has made in the last four years. She is a product of our first Junior Bison program and has gone on to contribute at a high level with Dakota and the provincial team program. She gives us some added size, she can play inside and out, and she has good shooting range. She will be a good complement to our current post play."

A graduate of Dakota Collegiate (2015-2018), Martin, 17 (18 in December), is a 6'1" forward and one of the most sought-after talents in Manitoba basketball this season, as she was one of five players named to the Basketball Manitoba AAAA Female-All Manitoba team.

Martin also won a bronze medal with Team Manitoba (17U) in the 2017 Summer Games, representing the province. She was ranked number five among Manitoba girls' basketball players in the 2018 Winnipeg Sun Coaches Poll, in a season where she was also named the South Central Athletic Conference (SCAC) League MVP. In her last high school campaign, Martin averaged 22 points, nine rebounds, and four assists per game.

Martin looks to continue success off the court as well, as she has maintained honour roll through all of high school and had an 89% average in grade 12.

"It has always been my goal to play at the university level," said Martin. "Having the opportunity to stay at home and play in front of my family and friends made the University of Manitoba an easy choice to pursue my basketball career." 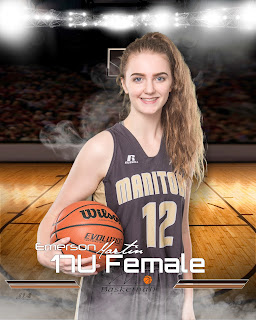 TEAM 17U Female
NAME Emerson Martin
POSITION Forward
HEIGHT 6' 2"
PRESENT GRADE Grade 11
PRESENT AGE 16
HOMETOWN Winnipeg
YEARS IN BASKETBALL 8 years
SCHOOL PRESENTLY ATTENDING Dakota Collegiate
SCHOOL ATTENDING THIS FALL
Dakota Collegiate
BASKETBALL CLUB NAME Centre For Performance
FAVOURITE PLAYER & TEAM Player: Karl-Anthony Towns Team: Golden State
SUMMER GOALS To be more competitive and vocal on the court and to continue developing my perimeter skills.
BASKETBALL ASPIRATIONS To have basketball apart of my future after high school. Including playing university and possible future coaching.
FONDEST MEMORY IN BASKETBALL Winning a close game against the Glenlawn Lions in the SCAC finals and being awarded with league MVP.
BIGGEST BASKETBALL INFLUENCE All of my amazing coaches that continue to push me and help develop my skills.
AFTER HIGH SCHOOL To continue my education in the field of kinesiology and play basketball at a high level.
WHEN BASKETBALL CAREER IS OVER Find a way to keep basketball apart of my life by coaching and work as an athletic therapist.