PUBLISHED ON May 28, 2018 Bobcats, Commitments, Headlines, 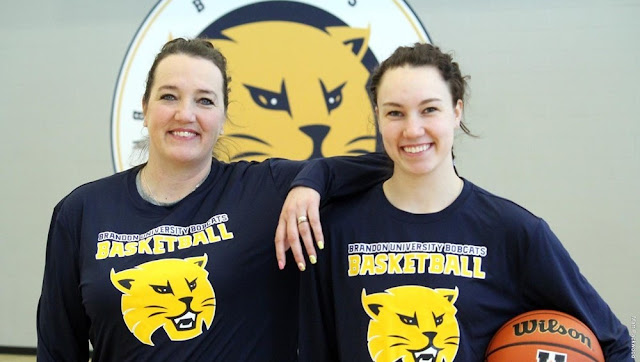 BRANDON - Bailey Johnson becomes the latest commitment to the BU Bobcats women's basketball program, but the Warman, Sask. product is very familiar with both Brandon and the Bobcats, despite not having spent much time in the Wheat City.

It's her family connection to both the community and campus, and her mother's remarkable story that laid the groundwork for the 6-foot-1 forward to transfer to BU.

Bailey will step on the court at Brandon University 26 years after her mother Tracy Johnson (nee MacLeod) first did. The senior Johnson transferred from her hometown of Abbotsford, B.C. while Bailey is joining the Bobcats after playing with the Lakeland College Rustlers this past season.

Their stories are slightly similar, transferring to BU as 20 year-olds after spending time in the college ranks, but this is where they hope their stories diverge.

Tracy's life was dramatically altered in just her second game as a Bobcat in January 1993 when she broke both the tibia and fibula in her right leg in a home game against Winnipeg, which led to the leg being amputated the following June.

Tracy rose to national prominence after she returned to the court for training camp the following year, where she enjoyed a successful career as a Bobcat, playing on a prosthetic leg before graduating from BU with two degrees and embarking on a successful teaching career.

Since then she has had both the BU and national women's basketball award for inspiration named in her honour.

Bailey hopes to find similar success, albeit under different circumstances.

"I'm extremely excited. I was nervous at first, but I always wanted to play university basketball ever since I was little, and with my mom's experience and what she went through, I've always wanted to play at this level, so I was very excited when Novell contacted me," says Bailey on a recent visit to the BU Healthy Living Centre.

Her mother's journey is well documented, but much like she did back in 1993, Tracy is looking ahead.

"I'm just excited for her future and what's yet to come in basketball," says Tracy. "To be able to watch her in the blue and yellow uniform, it's exciting both as a mom and alum."

On top of having the national award for courage named in her honour and a successful teaching career, Tracy has been a coach with Basketball Saskatchewan, leading successful provincial team programs over the years, some of which Bailey has played on.

This past season as a member of the Lakeland College Rustlers, the younger Johnson played in 23 games averaging 9.3 points per game while shooting 51.3 per cent from the floor.

While the familiarity with Brandon and the Bobcat athletic program will benefit Bailey, that's just one small part of the reason why coach Novell Thomas recruited the 6-foot-1 forward.

"Bailey has grown up around basketball most of her life with her mom being a coach, and she brings a diverse set of skills," says Thomas. "I like her footwork, her athleticism, her skills with her back to the basket, her ability to get up and down the court, and she has good form from the free-throw line, so I think in time she will become a very good all-around player."

Both mom and daughter are looking ahead to this fall, as Tracy should be in attendance this fall for the Bobcat basketball reunion to be held in conjunction with Homecoming 2018, which will also coincide with the Bobcats women's basketball team's pre-season schedule, providing the first time for the younger Johnson to hit the court where it all started for her mother.