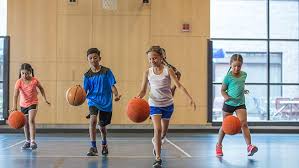 As a coach or a parent are you concerned about what position your son, daughter or young athlete occupies while playing basketball. Many coaches today start teaching young athletes about specific positions in basketball and informing those players that they must play that position for the whole season. Children at this age do not know the difference between a shooting guard and a power forward; rather, they just want to play the sport and have fun.


A quick story, one of my players on my under 11 boys team was asked the question by one of the parents about which position he plays on the team. His response: ALL OF THEM! This young athlete is 10 years old and about 5’5”; which is pretty tall for a grade five. We as coaches, sometimes have a hard time trying not to slot him into that ‘Center’ position because he is always one of the taller kids on the court; however, we have worked towards teaching him how to dribble and develop a mid-range jumper. From experience, it is definitely NOT easy to resist the inclination to put big kids under the net and smaller ones around the outside, but doing this may stunt the development of these young basketball players later on in their athletic career.
As coaches, it is important not to readily choose a position for the young athlete because a child who is 5’5” at nine years old, playing a ‘Center’ position may not grow very much throughout high school and end up moving to a point guard position. Will that nine-year old know how to handle the ball, shoot from outside, and make effective passes to their teammates? With that said, the nine-year-old young athlete playing as only a center position may not have developed his fundamental dribbling and shooting skills because he was only told to sit under the basket, grab rebounds, and a heavy focus on making layups. It is almost impossible to tell where your young athlete will be in 10 years – how much they will grow, mature, or what team they will end up on in the future. So, let’s try not to limit our kids’ potential by slotting them into a position at such a young age.
Coaches are able to educate their young athletes about the roles and responsibilities of each position because I believe it is important for them to learn, although not focusing on the positions too much during this age. These young athletes are able to have a general understanding of what it means to be a point guard or a shooting guard that way when they grow up and enter into more competitive leagues, such as high school or rep teams, they will know what it is like to play that position.
Some suggestions for helping in this process includes:
Let the big players bring up the ball and allow the smaller players to play in the post
During practices, focus on skill drills for every player on the team
Try not to separate the bigger athletes from the little athletes– Every player should be able to play together
Set your young athletes up for success in the end
Meeting with the parents at the beginning of the season
In conclusion, children at this age just want to have fun and develop their skills to eventually compete in higher levels within the sport. As coaches, we must give players the opportunity to play every position and allow them to feel comfortable at each spot on the floor. If we think about professional players such as Kevin Love, Kevin Durant, Blake Griffin, they are all big men with guard capabilities! Today’s game of basketball is changing where each individual player – no matter the position – must be able to dribble, pass, and shoot from outside. Yes, it is important to know where the different positions are on the court and what roles and/or responsibilities each one has, but that will come with experience, education, and practice.
As for right now, coaches and parents must just teach their young athlete how to be a basketball player and HAVE FUN!