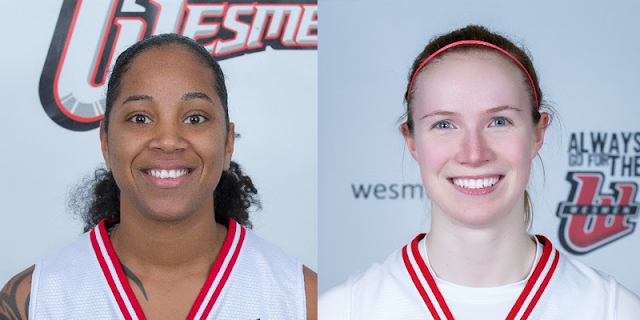 Antoinette Miller has done something no other women’s basketball player in Canada West history can claim.  The fifth-year Winnipeg Wesmen point guard was named the Canada West women’s basketball player of the year on Thursday as well as the defensive player of the year, the first time in conference history someone has won both awards in back-to-back years.

In 2016-17 Miller became just the second player in conference history to win both player of the year and top defensive player in Canada West.

The native of Phoenix outdid herself in her final season with the Wesmen. After averaging 18.6 points, 7.8 rebounds, 3.8 assists and 3.6 steals in 2016-17, Miller raised all of those numbers in her senior season.

Wenke served as a shining example of strength and courage, returning to her schooling, and later to basketball, after being the victim of a vicious assault in her home last May. The recovery process was arduous, but her dedication to her academic and athletic pursuits were an inspiration.

Wenke’s life was saved by a Good Samaritan, the quick work of paramedics on the scene, and the doctors at Winnipeg's Health Sciences Center, where she remained on life support for 24 hours after the attack.

Wenke returned to her psychology studies at the University of Winnipeg, and rejoined the team in November to play the game she loves, while showing remarkable courage and determination along the way. Wenke appeared in her first game Dec. 1 and would appear in nine conference games and four playoff games averaging more than 15 minutes per game in that span.

Both Miller and Wenke will now be up for the national U SPORTS awards in their respective categories. Those awards will be announced during the nationals awards banquet in Regina, March 7.

G – Antoinette Miller
5th-year
Phoenix, Ariz.
Applied Health and Education
2017-18 CW regular season: 20 GP / 25.9 PPG / 9.1 RPG / 77 steals / 96 assists
Antoinette Miller followed up her dominant 2016-17 Player of the Year season with an even better campaign in 2017-18.
The fifth-year guard led the conference in scoring (25.9 PPG), assists (96), steals (77), and finished sixth in rebounding (9.1 RPG).
Miller was undoubtedly the driving force behind the Wesmen, as she scored 20 or more points 16 times this season, including two 40-point games (43 vs. Alberta Nov. 4 and 40 vs. Manitoba Jan. 19).
She is the first back-to-back winner of the CW Player of the Year award since Sarah Crooks earned the honour for Saskatchewan during the 2005-06 and 2006-07 seasons.
In addition to claiming the top honour, Miller also was voted as the conference’s top defender for a second straight season. She is the first player in CW history to win both the Player of the Year award and the Defensive Player of the Year award in the same seasons consecutively.
Miller is the reigning U SPORTS Defensive Player of the Year and is now looking to add the national Player of the Year award to her resume.
“Ant, for us, guided the ship. She pushed us in practice and pushed our team to get better so that we could compete with the top teams in our conference. The record we had (14-6) was due in part to not only what she did statistically, but what she did behind the scenes to elevate the play of her teammates and push our program to compete and challenge.”
“Game in and game out, she was very consistent at both ends of the floor and I think every coach in Canada West would agree that she was the conference’s best player. She could step on the floor, change a game and carry our team.” – Tanya McKay, Winnipeg head coach.

G – Lena Wenke, Winnipeg Wesmen
3rd-year
Goettingen, Germany
Psychology
2017-18 CW regular season: 9 GP / 5.0 PPG / 64.3 % shooting
To say Lena Wenke is a deserving recipient of the Tracy MacLeod award – which recognizes determination, perseverance, and unwavering spirit – would be the biggest of understatements.
On May 23, 2017 Wenke's life changed forever when she was assaulted in her Winnipeg home while she was innocently focusing on completing spring courses and continuing with her off-season training. Wenke’s life was saved by a good Samaritan, the quick work of paramedics on the scene, and the doctors at Winnipeg's Health Sciences Centre, where for 24 hours she was on life support.
Wenke’s recovery continues, as she exemplifies resiliency, determination and strength.
Since the day Wenke woke from the attack, she committed to finding the will to continue the pursuit of her life goals. She has continued her psychology studies at the University of Winnipeg, while playing the game she loves, and showing remarkable courage and determination along the way.
After a long, grueling summer of recuperating, Wenke returned to school in late September, where she continued with her recovery, relentlessly training and studying to get caught up on the time she had missed. Amazingly, six months after the attack, Wenke stepped back on the basketball court in mid-November, entered her first game on December 1 and went on to play nine regular season games for the Wesmen, along with all four of the team’s playoff games.
“Lena’s been a pillar of strength considering what she has been through and where she is now. When I look at what Lena’s done this season, returning to action and working through what she’s been through, it’s remarkable. She’s full of courage and I don’t know anyone stronger than her.” – Tanya McKay, Winnipeg head coach.
Sources:
http://www.wesmen.ca
http://canadawest.org/sports/wbkb/2017-18/releases/20180301wbb