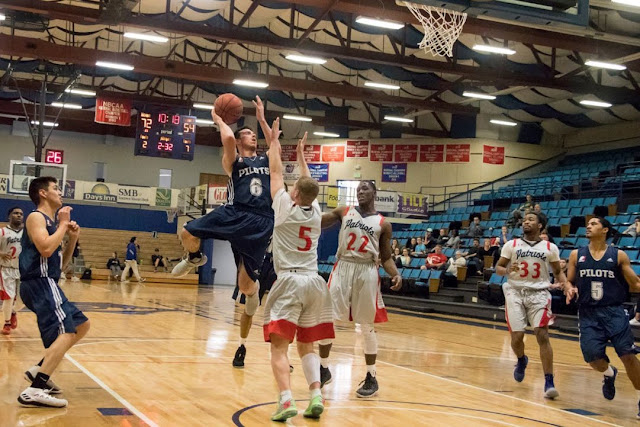 While on the road the tournament bracket was released. The Pilots men entered the competition seeded 8 of 10 with a first-round matchup against Baptist Bible College from Springfield, MO. The Patriots and their 1-27 record looked to like a favourable game for the higher-seeded Pilots. Providence was able to build an early lead and end the first half ahead 40-28. They would go on to outscore the Patriots by 10 in the second half, winning 89-67 and advancing to meet top-seeded Arlington Baptist. Chris Dick had a strong game with 20 points, shooting 9-11 from the field. Justin Pierite added 14 points and 10 rebounds.

The Pilots woke up Thursday morning to the smell of upset. But Arlington Baptist and the ACCA 2018 dunk champion had other intentions for the afternoon.

Providence started strong, down 11 at the half with hopes of cutting into Arlington’s lead and applying some pressure. Arlington played a flawless second half, building their lead to 22 and ending the Pilots’ hopes of a national championship with a 95-73 triumph. The difference in the game was rebounding and free throws. Arlington was able to get to the line and convert 20 of 25 free throws compared to the Pilots 4 from 7 attempts. Arlington also out-rebounded Providence by 12 and outscored the Pilots 54-32 in the paint. Kendall Perpall had 15 and Jordan Lawson 14 of the Pilots 73 points.

Game Three of the Pilots’ ACCA campaign was their final opportunity to crack into the tournament’s top five teams and improve on their seeding of eighth.

Providence faced Rhema Bible College from Oklahoma. Rhema, led by the tournament’s second-highest scorer, Kendrick Williams, who ended up averaging 33 points per game, prevailed 91-75. The Pilots had a slow start and trailed 52-31 at the half. And were unable to slow Williams, allowing him a game high 28 points. Perpall showed the strongest for the Pilots with 20 points and 9 rebounds.

Early Saturday the Pilots played their fourth game in four days when they faced tournament hosts Ozark Christian College. The seventh seed entering the event, Ozark went on to edge their guests 84-81, although the game produced the most exciting 40 minutes of basketball Providence played in Joplin.

Ozark opened up a 15-point lead after just 10 minutes, and the Pilots looked to be facing a large half-time deficit. But they turned the game up-side down and went on a run to end the first-half that left the game knotted at 42 points apiece. The two teams played shot for shot in the second period, and it was a crucial three-pointer from Providence that sent the game to overtime.

Perpall once again led the Pilots with 22 points and 8 rebounds. He and Jordan Lawson, both Oklahoma natives, were also recognized as All-Americans at the conclusion of the tournament.