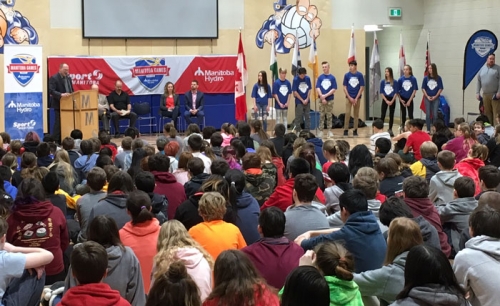 Basketball will feature male and female athletes ages 16 or under in 2020 (born in 2004).  A call for coaches will be coming out in the spring 2019 and team tryouts to occur in spring 2020.  The new regional boundaries as announced by Sport Manitoba last year will be in affect for 2020.  Details on the new boundaries are here.

The City of Dauphin also introduced Host Society Co-Chairs, Carla Wolfenden and Clayton Swanton. Wolfenden has extensive sport event management experience in her capacity as the National Teams Coordinator for Volleyball Canada. Her past events include various roles in World League, Olympic and World Championship Qualifiers, and the 2007 Pan Am Games in Rio de Janeiro. Upon return to her hometown of Dauphin in 2009 Wolfenden worked in tourism and recreation, but has now taken over the family business with her husband. She is happy to follow in the footsteps of her dad, Jim Steiner, who was co-chair of the 2004 Manitoba Games in Dauphin.

“Clayton and I are honoured to carry on the legacy of the 2004 Games, and to welcome a new generation of athletes to Dauphin,” said Wolfenden.  “We are excited to be a launch pad for their development as athletes and role models. Our community prides itself on being a great host, and we are confident that our host committee will ensure that the athletes, their families, officials, and fans alike will leave with great memories of our city and their games experience.”

Swanton has a history of local event management. He is highly involved with the Rotary Club where he served as president in 2011 and is a founding director of its major fundraiser, The Manitoba MudRun. Swanton is also a past Board Member of the Countryfest Community Cinema where he served during the construction of the project through its first year of operation. He was also past Vice-President of the Gilbert Plains Golf and Country Club. Swanton knows the value of empowerment through sport having completed two Ironman distance triathlons, a 150 mile and a 100 mile Ultra Marathon, and many shorter distance events.     Dauphin Announced as host of 2020 Manitoba Summer Games powered by Manitoba Hydro

“In addition to the athlete experience and development mentioned by Carla, we are also very excited about the infrastructure development that will be possible with the 2020 Games announcement today,” said Swanton. “Active Living is the cornerstone of any healthy community and the selection of Dauphin as the host for the 2020 games will allow us as a community to leverage significant opportunities for increasing the active living offer in the Dauphin area, both within the city limits and beyond, as we prepare our facilities to host Manitoba’s greatest young athletes.”

The Manitoba Games Council evaluated Dauphin's technical and comprehensive bid submissions along with meeting with Dauphin's bid committee and community leaders. After reviewing all materials and meeting with the Dauphin bid committee, the Manitoba Games Council had analyzed all criteria to the hosting standards and unanimously recommended that Dauphin be awarded the 2020 Games.

Sport Manitoba will work with the Dauphin bid committee over the next six months to transition their bid committee into a Host Society and recruit key volunteers for their executive and board.

“We are delighted to name Dauphin as host of the 2020 Manitoba Summer Games. This is a great opportunity for the community to get involved as hosts, volunteers and spectators as well as to showcase the beauty and hospitality of the Parkland region to visiting athletes, coaches and families. The games create a festive atmosphere that benefits the host city’s culture and economy and leaves behind local memories that last for many years.”
The Honourable Minister Cathy Cox, Minister of Sport, Culture and Heritage

"The Manitoba Games powered by Manitoba Hydro help us build capacity in sport, leadership, and ability for upwards of 3,000 athletes, coaches, officials, and volunteers. Among the participants in Dauphin in 2020 will be future national, international, and Olympic champions. We are thrilled to have the opportunity to work with the people of Dauphin once again after their successful hosting of the 2004 Manitoba Games.
Jeff Hnatiuk, President and CEO, Sport Manitoba

“The City of Dauphin is thrilled to host the Manitoba Summer Games in 2020! Our last chance to host the games was in 2004 and I have no doubt that our host committee will exceed expectations and give young Manitoban athletes an inspiring experience to remember."
His Worship Allen Dowhan, Mayor of Dauphin

"The RM of Dauphin is pleased to hear that the 2020 summer games are coming to Dauphin and look forward to working with the City of Dauphin to make the games a success for participants and spectators alike."
Mr. Dennis Forbes, Reeve of the RM of Dauphin


You can read about the past basketball involvement in the Manitoba Games at... http://www.basketballmanitoba.ca/search/label/Manitoba%20Games

Learn more about the Manitoba Games including the new regional boundaries at https://www.sportmanitoba.ca/manitoba-games