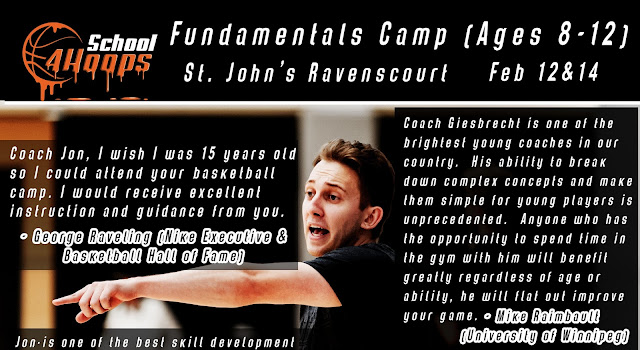 CAMP FILLING UP: Coach Jon Giesbrecht has announced a 2-Day FUNdamentals Camp - the camp will be February 12th & 14th from 6:30pm to 8:30pm on the 12th, and 6pm to 9pm on the 14th at St. John’s Ravenscourt.  Jon is teaching skills and concepts through a games approach - Learning can be fun! Jon recommends that the younger athletes 8 and 9 years old who register be advanced when compared to players their own age. 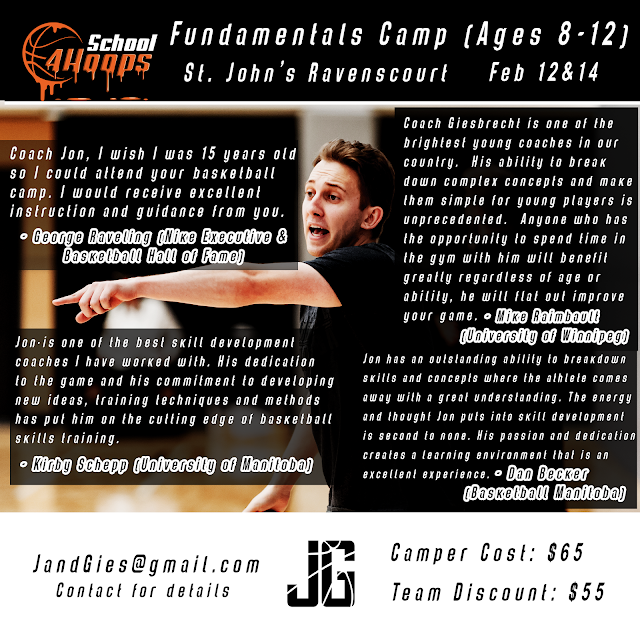 There is opportunity for young coaches - Jon is looking for young people aged 14-21, who are interested in coaching. Jon will mentor the young coaches over the two days.


What others are saying about Jon Giesbrecht:

Currently an assistant coach with the Winnipeg Wesmen Men’s Basketball program, Jon brings experience from all levels. Jon has five years of experience working with university athletes - Three years with the Winnipeg Wesmen and two years with the Manitoba Bison. On top of Jon’s university coaching experience he has worked with the Basketball Manitoba’s Provincial teams - totaling four years of experience, including a National Championship in 2014 with the 17U Male group, first in the province’s history. Most recently in the summer of 2017, Jon was the head coach of the 15U provincial team. In 2015-16, Jon was on the coaching staff of the John Taylor Collegiate Varsity Boys team which won the ‘AAAA’ provincial championship, second in program’s history. Including the latest high school championship, Jon was a part of two Junior Varsity provincial championships in 2010-11 and 2013-14. Jon’s individual coaching honours include: 2013-14 Junior Varsity Coach of the Year, 2010-11 WMBA Bruce Russell Memorial Coach of the Year, and recipient of the Jim Bulloch award presented by Basketball Manitoba.

Can't see the form?  CLICK HERE to view it in a new window.


⬆⬆ SCROLL BACK TO THE TOP AFTER CLICKING SUBMIT ⬆⬆