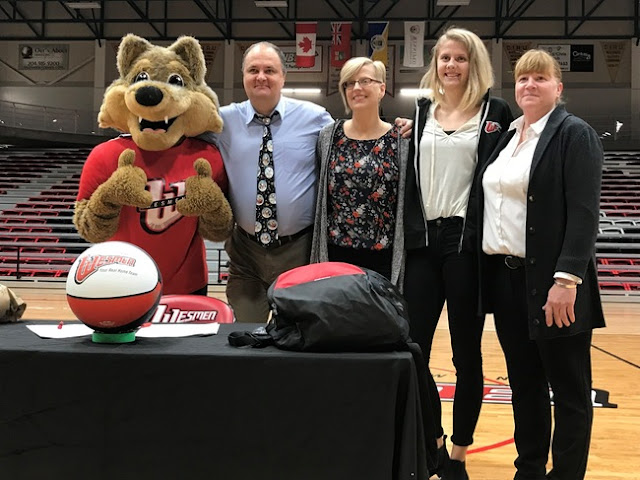 The 6-foot-2 post from Northlands Parkway Collegiate in Winkler has committed to Tanya McKay's Winnipeg Wesmen women's basketball program as part of the 2018 recruiting class.  Funk, who averaged 24.1 points, 18.2 rebounds and 7.3 blocks per game last year, signed her letter of intent in a halftime ceremony during the Wesmen win over the MacEwan Griffins Saturday night.

"It's always been my dream to go to U of W," Funk said afterwards.

Funk, who will study athletic therapy while at U of W, chose the Wesmen over offers from Canadian Mennonite University and Providence University College.

Following her Grade 11 year, Funk was a member of the Manitoba provincial team that won bronze at the Canada Summer Games in Winnipeg last summer.

In March she was one of six Manitobans, and 57 players across Canada, to be invited to Canada Basketball's age-group assessment camp for the national program.

"It just opened my eyes to the competitive side of basketball," she said. "Before the provincial team I had no idea what competitive basketball really was."

She said she struck up an immediate rapport with McKay. 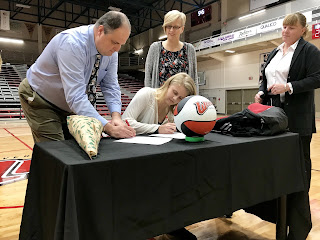 "She's been really nice. I've known her from past teams and she's come and worked with me and just been amazing," said Funk, who acknowledged her focus will be on improving her ball-handling and shot consistency at the next level.

McKay said Funk's height is an obvious bonus, but said the product of Todd Redhead's Nighthawks program is coming in with her eyes wide open as to the expectations that will be placed upon her.

"She's been exposed to the provincial team and the national team program, so we know that she's motivated to come prepared," the head coach said. "She understands that the off-season's going to be very important for her to build up strength, maybe put on a little weight to get her ready for the (USports) level.

"Definitely her length is going to help us. We feel that she can be somebody that we can rely on to get boards for us and even defend the paint and be a presence."

Redhead called Funk "the backbone" of his program at NPC.

"The improvement that Mikayla has shown in the past three years at Northlands is amazing and it is all due to her hard work and commitment to basketball both during the season and especially in the off-season with Basketball Manitoba," Redhead said. "She is driven by her passion for basketball, her willingness to work hard to be the best and not settle for good enough."