A Parent’s Guide to Dealing with Crazy Parents 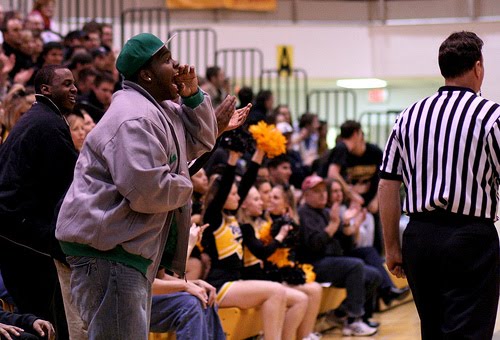 I’ve previously described some nightmare scenarios when it comes to parents on the sideline at youth basketball games. I truly believe that most parents are well-intentioned, but just get caught up in the moment and don’t truly consider the impact they are having on their kids or the other parents around them. Today I want to present some practical solutions for what you can do as a youth sports parent when it seems that everyone around you has gone crazy.

I love having the opportunity to just stand on the sideline or sit in the bleachers and watch my kids play. Since I spend so much time coaching them in basketball it is nice to put away my coaching mindset and just watch. I don’t want to be surrounded by people yelling instructions, berating the coaches and officials, or making a nuisance of themselves. What’s the easiest way to do that? You will almost always find me in the corner of the field or at the end of the bleachers sitting by myself or with one or two other parents who are also there just to watch. I never sit in the middle of the parent section. I just want to watch my kids play, not listen to someone question the coaching or scream obscenities at the officials!

Parents have been questioning coaching strategy from the first moment a kid stepped on the court back in Dr. Naismith’s day, but that doesn’t mean you have to participate. When that starts happening steer the conversation another direction or walk away.

Sure, maybe the refs aren’t too good, they make mistakes. Have you ever made a mistake a work? Would you like someone walking up and down the halls of your office to scream stuff like, “Come on moron that was clearly the wrong way to report those expenses!” Don’t be a part of that. Remember, you’re setting an example for your child and the other kids on the team. Blaming the officials teaches kids to make an excuse. I once had another parent say to me after my daughter missed a layup in a game, “Hey Mike, that was a foul. Where’s the call?” My response to him, “She has to go up strong and make the shot. Can’t depend on the official to make the call.” Put the control back where it belongs, with the player. Just because other parents want to yell at the refs doesn’t mean you have to do it too.

It’s Not About You

In the article about Sideline Sportsanity that I shared two weeks ago the observation was made that parents who tended to be the most relaxed at their children’s games were those that had reached a high level of success in sports themselves. Therefore, they were not as caught up in the achievements of their kids to establish their own identity. Based on my experiences I would agree. There may be exceptions to this rule, but in general I think it’s true. When you find yourself getting all worked up, count to ten and remember it is not about you. It’s your child’s joy and their journey.

Overwhelmingly, research shows that kids want their parents to be quiet on the sideline. They don’t want instructions (Coach gives them those), they don’t want you yelling at coaches, refs, or other players (it’s embarrassing), they really don’t even want you to cheer. If you can be a quiet observer, your child will appreciate it.

If you coach the team you can choose kids based on their parents! You know who the problem parents are, don’t pick their kids for your team. Everyone will have a better experience!

Two quick stories. I once was conducting an AAU tryout where the father of a boy trying out kept screaming at his son every time he got the ball, telling him to shoot, or drive, or pass, or whatever. The player was good enough to make the team. I did not choose him simply because of his father’s behavior. At another tryout for a different team on the evaluation report for one player it said simply, “CRAZY MOM”. That player didn’t get picked either. Don’t be the reason your child doesn’t get picked for a team. You can’t make them better by yelling at them during a game, practice, or tryout.

Trust me when I tell you that coaches know who the problem parents are and they often think less of your child as a result.

If you are stuck with a team full of crazy parents I urge you to find another team to play on. Find like-minded parents who believe that youth sports should be fun. Don’t steal your child’s joy (and yours) by remaining with a group of parents that don’t get it. This might be easier said than done in some cases, but there are always alternatives.

Educate The Parents And The Coach

If you don’t want to confront another parent or have a difficult conversation about their behaviour you can always enlist the help of the coach. Encourage the coach, organization, or league to have a discussion with parents or even institute a parental code of conduct to help make the sidelines a fun and pleasant place to watch a game.