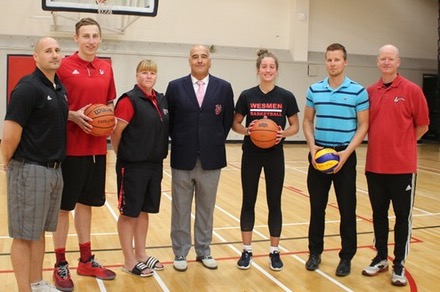 The University of Winnipeg Wesmen Athletics have announced that the annual Wesmen Classic will expand to a more gender- and sport-inclusive format, beginning with the 2017 tournament this December. The expanded Classic welcomes women's basketball, as well as men's and women's volleyball, which join the existing men's basketball tournament.

"The Wesmen Classic has been one of the stars of the Wesmen program for 50 years, and it will hopefully continue for another 50 years with this exciting new format," said Dave Crook, Athletic Director, UWinnipeg. "We think it is fantastic that we can share this great event among our four court sports, and give a wider group of fans the opportunity to be a part of this amazing event."
Each of the tournaments — including the men's basketball tournament — will now rotate on an annual basis. The first Wesmen Classic under the new format will feature men's volleyball (university) and takes place December 28 – 30, 2017. Subsequent tournaments will rotate as follows:
Since its inaugural edition in 1967, the Wesmen Classic has grown into a premier event in Manitoba and Canada's basketball communities. The tournament has featured national competition at the university level, while also highlighting emerging talent in the provincial high school and junior varsity levels.
"The Wesmen Classic represents a time-honored, holiday tradition at The University of Winnipeg and the City of Winnipeg," said Tanya McKay, Head Coach, women's basketball. "The Wesmen women's basketball program is excited by the inclusions in the new Classic format, and we are honored to have the opportunity to host the tournament in December 2018."
"The Wesmen volleyball program has a national championship legacy second to none in Canada," said Larry McKay, Head Coach, men's volleyball. "Showcasing the volleyball program within the Classic is very exciting for the Winnipeg volleyball community, and a fantastic way to honour to legacy of those who have built it."
Notable alumni of the Wesmen Classic include former MLA Kevin Chief; two time All-Canadian Erfan Nasajpour; and Manitoba Basketball Hall of Fame members Ken Opalko, Jeff Foreman, and Norm Froemel.
Source: http://www.wesmen.ca