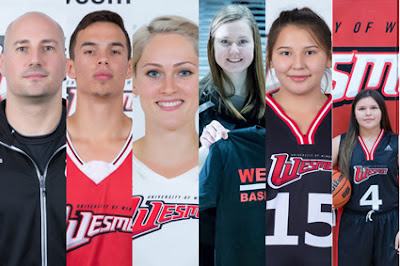 Six members of the University of Winnipeg Wesmen will be involved in the upcoming 2017 North American Indigenous Games taking place July 16-23 in Toronto, Ontario.  On the boys’ basketball side, Wesmen head coach Mike Raimbault entering his 8th season will be the head coach of the U19 Manitoba Male Basketball team. A proven winner Raimbault guided the University of Northern British Columbia Timberwolves to the Canadian College National Championship before joining the Wesmen. He was recognized as the CCAA Men’s Basketball Coach of the Year.

“It is an honor to be representing our province at the upcoming NAIG games  I’m grateful for having been asked to work with the program this year, and look forward to a rewarding experience”, said Raimbault.

In girls’ basketball action, three members of the Wesmen Women’s Basketball program will participate. First year players Robyn Boulanger and Tania Wallack will be members of the Manitoba U19 Female squad. Fifth year player Skylar Boulanger will be on the bench as an assistant coach with Manitoba’s U16 Female team.

Former Wesmen women’s volleyball player Jayme Menzies will be one of the coaches for Team Manitoba’s U19 Female squad. Menzies played five years with the Wesmen (2004-2008, 2015-2016). Since her playing days, she has become a successful coach, being honoured as she was named the Volleyball Manitoba Developmental Coach of the Year (2015) and was the recipient of the Manitoba Aboriginal Coaches Award in 2016.

"The Indigenous Games combines all of my passions in to one event: It is not only a sport competition, but a cultural showcase, a means to empower young girls, an opportunity to explore North American cities, and a political platform for athletes, artists, volunteers, community leaders and media outlets to raise awareness about important Indigenous topics”, added Menzies.

About NAIG
The North American Indigenous Games is a multi-sport, multi-disciplinary event involving Indigenous youth from Canada and the United States. The Games offer 14 sport competitions in addition to a vibrant cultural program, showcasing local and North American indigenous cultural groups and entertainers.

The NAIG, was first held in 1990 in Edmonton, Alberta, and has been staged on seven other occasions since then, in various locations throughout Canada and the United States. Athletes competing in the NAIG must be born of North American Indigenous ancestry.