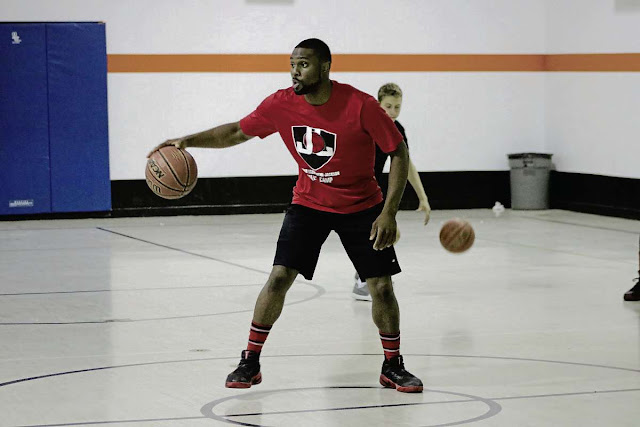 Ogungbemi-Jackson, a 5’10” point guard, is coming off of a two-year stint with Galitos-Barreiro of the Portuguese Liga Portuguesa de Basquetebol (LPB). Ogungbemi-Jackson finished this past season third in the LPB with 18.9 points per game and fifth in assists with 4.8 per game, while adding 3.8 rebounds and 1.1 steals per game over 29 appearances. Ogungbemi-Jackson’s performance led to him being recognized by Eurobasket.com as the Portuguese LPB Guard of the Year as well as a member of the All-Portuguese LPB First Team and the Portuguese LPB All-Imports Team.
A Winnipeg, Canada native, Ogungbemi-Jackson graduated from Garden City Collegiate, where he averaged 28.0 points, 10.0 assists, 8.0 rebounds, and 5.0 steals per game in his senior year. In his final two seasons there, he was named Most Outstanding High School Player in Manitoba as he led his team to back-to-back provincial titles. After graduating, Ogungbemi-Jackson began his collegiate career at the University of Calgary in Canadian Interuniversity Sport (CIS), and the Canada West Universities Athletic Association (CanWest).

Upon graduation from the University of Calgary, Ogungbemi-Jackson signed his first professional contract with Galitos. In his first season with the team, Ogungbemi-Jackson averaged 14.8 points, 3.1 rebounds and 4.0 assists. He was named to the All-Portuguese LPB Second Team by Eurobasket.com, as well as Eurobasket.com Portuguese LPB Player of the Week on three separate occasions.

Ogungbemi-Jackson also has experience on the international stage, as he attended the 2009 selection camp for Canada’s Junior National Team, and recently represented Canada at the 2015 FISU Summer Universiade in Gwangju, South Korea.

“I am very excited to be joining Forca Lleida this season and I am thankful for the opportunity to play for a great organization and an amazing fan base,” said Ogungbemi-Jackson. “I look forward to having a successful season with my new teammates and coaching staff.”

Forca Lleida finished last season in 10th place in the LEB Gold with an 18-16 record.

“Signing Jarred was our priority this summer, so we are satisfied after reaching an agreement between him and our club,” said Borja Comenge, Forca Lleida, Head Coach. “We wanted to start building our team from his leadership and personality on the court. We think that his skills and the way he plays is exactly what we are looking for to perform well in our league next season.”

For more information and individual box scores for Jarred throughout the season please visit http://slansportsmanagement.com/jarred-ogungbemi-jackson.

Slan Sports Management (SSM) is a dynamic sports management firm dedicated to building and managing the careers of elite basketball players. SSM has negotiated contracts for its clients in over twenty countries around the world and continues to be a leader in the basketball representation business. To learn more, visit: http://slansportsmanagement.com.