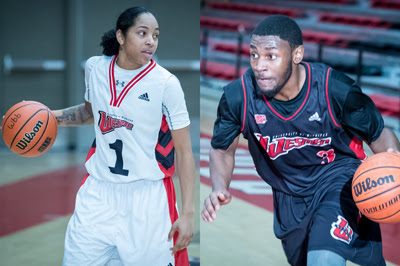 The University of Winnipeg Wesmen has announced the official release of the 2017-18 Canada West Conference Men’s and Women’s regular season basketball schedules for the upcoming season starting in late October.

The Wesmen basketball teams will begin regular season play on Friday, October 27 in Calgary against the Mount Royal Cougars. The Wesmen will play their home openers on November 3rd against the Alberta Pandas/Golden Bears. Winnipeg will hit the road for two consecutive weekends starting with a pair of games against the Calgary Dinos (November 11-12) followed by two games on the West Coast against the Fraser Valley Cascades (November 17-18). The Wesmen close out their first half schedules on home court facing the UBC Thunderbirds (November 24-25) and the MacEwan Griffins (December 1-2).

Following the December break, Winnipeg will play eight games (four home, four away) beginning with a home and home series against the Brandon Bobcats (January 5-6). Following a bye in the schedule, Winnipeg will take on their cross town rivals Manitoba Bisons in a home and home set, beginning Friday, January 19th with the basketball portion of the 27th Annual Duckworth Challenge at the U of M. The rivals will conclude the series at the U of W the following night (January 20th). The Wesmen will hit the road for the final time in regular season play in Regina (January 26-27) before concluding regular season play on home court facing the UBC Okanagan Heat (February 2-3).

For the second consecutive season, ratings performance index (RPI) will be used to seed playoff teams, while win/loss records will again be used to determine playoff qualification. The CW RPI was implemented last season to account for varying strengths of schedules, resulting from the conference’s unbalanced schedule.

While RPI remains, the formula used to calculate it doesn’t. Alterations have been made to the RPI formula, following review by Canada West’s sport committee. The new formula, listed below, has been amended to both increase the value of a team’s win/loss record, while reducing the value assigned for away wins and increasing the value for home wins.

In addition to the altered RPI formula, a new playoff format is also coming to CW basketball this season, as the conference eliminated the CW Final Four tournament in favour of a one-game championship hosted by the highest remaining seed.

The number of playoff teams (12) has not changed from last season. The first round of conference playoffs will see the top four seeds earn byes, while the remaining eight teams will play single-elimination games (12 @ 5, 11 @ 6, 10 @ 7, and 9 @ 8) between February 8 and 11.
The conference quarter-finals (best-of-threes) are set for February 15-18, the CW semis (best-of-three) February 22-25, and finally the CW Finals (and bronze medal games if necessary to determine national tournament berths) March 2 or 3.

U SPORTS nationals are slated for March 8-11, with the women’s event being held by Regina – for the fourth time in school history – while the men’s event returns to Halifax again for a second consecutive year.